The Chemical Warfare From Syria 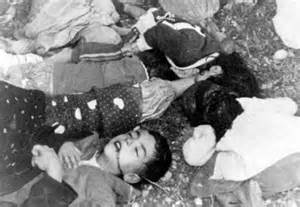 21 years ago in Halabja near the Iran border, a Sarin gas attack

Today is Memorial Day in the states.  We remember our fallen soldiers by going to the cemeteries and placing flowers on their graves.  Jews places stones as a reminder that we were there.  We recognize what they went through to bring our country freedoms that we enjoy and appreciate and thank our fallen soldiers.

In Syria, a Syrian doctor and several medical students were at a grave also, but they were there to take samples of tissue from a man who had died of respiratory failure after a rocket was reported to have spewed poison gas on Dariya, a suburb of the Syrian capital on April 25th.  Syrians have asked the USA to intervene in the 2-year Syrian civil war and are hoping that this further evidence might be enough to get the international community to act.

Obama wants proof that Assad has been using gas or chemical warfare on his people of which over 80,000 have already perished in their civil war.  Last month he had sent a letter to Congress that he had received "physiological samples" that led the US intelligence agencies to conclude...that Assad had used Sarin nerve gas on a small scale.  The US has provided humanitarian and other nonmilitary aid to the rebels, resisting calls to get more involved .  We have found that getting involved leaves us no door to get out of conflicts quickly.  We get mired in them.  So even though Obama had his red line that was not to be crossed before action would be taken with gas attacks, he needs more convincing.  There's always the chance that the rebels would manipulate evidence, so we're being extra cautious.

Israel can't take any chances.  They're neighbors of Syria and not on Assad's hit parade of friends, or rather we are on his hit list.  Assad wouldn't hesitate to use his storage of chemical warfare on Israel, so Israel is going through a week long exercise of what to do in case of chemical warfare.  This is not the first time that Israelis have been issued gas masks and directed to prepare a safe room.  This is why they had bombed the shipment of missiles in Syria about a month ago.

Assad is backed by Iran who are backed by Russia.  What an evil empire they make.

Resource:  http://www.timesofisrael.com/israelis-asked-to-take-cover-as-chemical-warfare-drill-commences/?utm_source=dlvr.it&utm_medium=twitter
Oregonian newspaper, page A 4, Syrians look to grave for evidence of nerve gas use by David S. Cloud, Tribune Washington Bureau
Posted by Nadene Goldfoot at 8:01 AM