The Aftermath in Syria After Military Complex With Missiles Hit 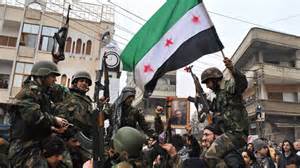 While Prime Minister Netanyahu of Israel kept his appointment in China, who was hosting both Netanyahu and the "Palestinian President" Mahmoud Abbas Monday,  the USA Secretary of State, John Kerry, was in Russia to talk with them because they are Syria's most powerful ally.   The visit in China centered on their interest in playing a more active role in diplomacy because they are looking for more "markets, resources and diplomatic influence".

The  window of circumstance had opened, meanwhile, back in Israel where they had discovered that there existed extensive missiles at a site meant for Hezbollah terrorists to use against Israel.  This complex must also hold the chemical weapons they have already started to use.  Because of that alone, Israel was forced to issue gas masks to their entire population.  We know that they had two choices;  wait to be hit by thousands of missiles that could reach and wipe out Tel Aviv and hit as far as southern Israel from inside Lebanese territory or conduct a preemptive strike, which they have had to defer to before.  These missiles are bad enough as they are, but could also be tipped with chemical warfare.   Unlike the USA, information is accurate from their sources and the danger  is so close that one can just about see the target with binoculars from Israel.

The decision was made, unofficially.    It wasn't like not having warned Bashar Assad before about this problem.  Israel pin pointed the target and reports are that the sky was lit up.  The arms that were hit were causing a boom and a very frightful force felt by many.  In the end, we find that that this airstrike on Syria's military complex near Damascus killed about 42 Syrian soldiers.

The USA could not make such a decision and also its existence was not threatened like Israel is.  It's been aiding the rebels in other more humanitarian ways with such things as food.  Now Moscow realizes, and should have known anyway, that Israel wasn't waiting around for approval from the international community to deter this threat to their lives.  When Israel says, "This is the red line,"  they mean it.  Russia and China, giants of countries, have blocked USA's efforts 3 times already to even pressure Assad into stepping down.  Iran doesn't want him to, either, as he's their puppet and also on their take.

What this can cause now is a switch over of sympathy and it gives the Arabs cause to go over to Assad's side instead of the rebels.  The main picture in the Oregonian is that of Iranian and Syrian students chanting slogans during an anti-Israel demonstration Monday in front of the UN office in Tehran, Iran.  This will cause many to join them in their assessment against Israel, who are against them anyway.  Now they can really yell.

Assad has managed to kill off over 70,000 of his own people in his zeal to hold onto his kingship in the past 2 years alone.  Evidently life in such a police state was hard to deal with, causing such an Arab Spring in the first place.  It's been hard to rule people in Syria and Iraq as it is which has brought on such hard-nosed rulers in the first place who deal with an extremely volatile people.  These are hot countries that have hot-headed people.  Assad is holding onto what he thinks is his for dear life.  He's not about to step down.

Crippled Syria is nevertheless calling out that this strike that they figure came from Israel is a declaration of war.  I have news for Syria.  They never signed a peace agreement with Israel, either, and has been one of the prime leaders in all the wars against Israel.  It's known in this world that if one country has threatening moves on another, whether it be thousands of soldiers lined up ready to strike or missiles known to be destined to hit that country, one is allowed a pre-emptive strike for self defense.

By conducting this important airstrike, of which CNN TV news has had non-stop videos and comments yesterday, Israel inadvertently aided the rebels a great deal by destroying the military complex completely.  One cannot find but pieces of it remaining.  The blast permeating from it shows the level of the contents inside; huge.

The rebel were not asleep .  They shot down a military helicopter which killed 8 government troops in the east, while another group of rebels were inside a sprawling military air base in the north fighting on their 2nd day Sunday and Monday.  Assad's warplanes were pounding rebel positions inside the Mannagh air base in the north and the army had regained control of 6 villages that link the northern city of Aleppo with its airport.

The report from Syria's "OMRAN AL-ZOUBI, Syrian Information Minister: The Israeli invaders committed a blatant act of aggression against Syria. The Syrian military has the right and responsibility to protect its country and people from any form of infringement either at home or abroad."  Yes sir, if anyone has the right to kill off Syrians, it is the Syrian government.  How can this man keep a straight face when he says this?