Weapons Research Building in Syria Taken Out By Israel 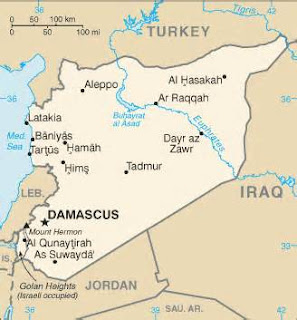 The distance from Jerusalem, Israel  to Damascus, Syria  is only 135 miles.  About 10 miles from the Lebanese border shared with Israel is the city of Jamraya's  weapons research facility. It is a suburb of   the capital, Damascus, situated northwest of it with coordinates of 33°33'43"N   36°13'9"E.  Inside this facility, sophisticated weapons are being made to arm the Lebanese Hezbollah militia.  This group not only is an ally of Syria's President Bashar Assad but is also the "heavily armed foe" of Israel. The weapons would also be used by Hezbollah against Israel. The facility was hit Friday by Israeli missiles in an air strike.

The Syrian state news agency, SANA, was the first to cite the reports of the bombing by Israel.  Israel told Syria before that it will not allow sophisticated weapons to flow from Syria to these terrorists. Syria had a population of 22,505,000 of which 90% are Sunni/Shi'a Muslims with military power of 296,000 before their raging civil war.  The Syrians have managed to kill many of their civilians who are rebelling against the dictator who has now used chemical warfare against them in one location.  The death count is 70,000 or more, rising daily.  4,000 Syrians from Banias are fleeing with hearing reports that pro-government Syrian gunmen might commit a massacre there.  Friday's report alone is that from 62 people to 102, including 14 children were killed in the civil war.

A weapon facility and its trucks were hit in January and again Friday by Israel in Syria. Both targeted weapons shipments were for Hezbollah.  The January hit was to trucks that carried SA-17 anti-aircraft missiles.  On Friday, the weapons shipment was also targeted, striking the warehouse as well.

Israel has the right to defend itself.  USA President Obama reiterated this fact to Costa Ricans on Saturday during his visit there.  He went on to explain that Israel is very close to Syria and Lebanon and that the USA coordinates closely with the Israelis.

The USA is holding out in intervention in Syria's ongoing civil war.  He doesn't see the USA putting "boots on the ground."  Chemical weapons use in Syria is still under investigation.  He wants solid facts and considers what move is in the interest of the American people and national security.  Best evident and consultation with others will determine his decision.  He's not a leap before you look person that overlooks unintended consequences on the ground.

Bashar Assad's father, Hafez al-Assad,  was Syria's previous ruler.  He held the reins for 30 years.  Bashar has been king since 2000, entering the time of the Arab Spring, which his father didn't deal with.  That's 43 years of one family who have held an iron grip on this nation.  Some of the rebels are from the Muslim Brotherhood, so it's hard to tell the motives of each and if they're an improvement over Assad or not.  It's been a police state.  Iraq was in the same position with their dictator, Saddam Hussein.

Hezbollah  or Party of Allah is a Shi'a Muslim militant group based in Lebanon, also supplied by Iran, a Shi'a country.  They are a terrorist organization.  "Hezbollah was conceived by Muslim clerics and funded by Iran following the Israeli invasion of Lebanon and was primarily formed to offer resistance to the Israeli occupation. They consider Jews creating Israel as an occupation of the land."  This is why recognition of Israel as the Jewish state is so vital.  It involves security from all the neighboring states.  "Ending Israel's occupation of Southern Lebanon, which lasted for 18 years, was the primary focus of Hezbollah's early activities.   Israel had become militarily involved in Lebanon in combat with the Palestine Liberation Organization (PLO) in 1982 which had been invited into Lebanon after Black September in Jordan."