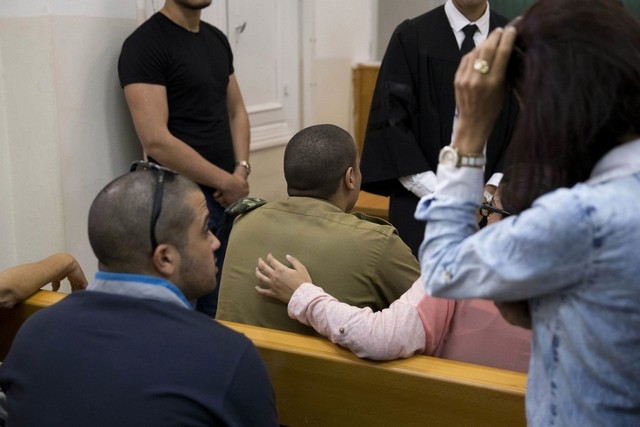 Fareed Zakaria's GPS Sunday morning program opened with a discussion about the Israeli soldier who is in hot water for shooting a Palestinian. Fareed said this has caused Israel's Defense Minister  to be fired and that there is a feud between the Generals (Alufeem)  and Netanyahu.  He was replaced with Avigdor Lieberman causing the lawmakers to be against the appointment.  Moshe Yaalon had resigned, accepted as a good defense minister who had in a year calmed a big uprising.  .Moshe is one who sides with the military.

The decision by Netanyahu comes from dealing with the politics of the moments, the centrists, which brought about choosing a hawk like Lieberman.  The question is, will he continue to uphold their strong moral values?

What happened was that a 19 year old IDF Sgt Elor Azria, French Moroccan, shot a wounded Palestinian attacker while he was lying down on the ground in Hebron (18 miles south of Jerusalem)  on March 24th of this year.  The soldier has been charged with  violating the rules of engagement without justification.  The terrorist showed no immediate threat for anyone.  He had shot and killed Abdul Sharif, 21.  He was charged with inappropriate military conduct.

This is where Abraham buried his wife, Sarah.  He bought a plot of ground which included a cave which is where he buried her.  Today a mosque stands over the site.  Hebron was one of the Levitical cities as well as a city of refuge under the Israelites.  The screw-up in finally allowing Jews their Jewish Homeland-20% of the promised land,  made sure that Israel would not get their ancient homeland.  Religious reasons?  Political reasons?

This was just before Passover.  He was allowed to have one night with his family Friday at the start of Passover.
Hebron is in Judah, what Westerners call the West Bank,  and is a city with important history to Jews.  It now has become a Palestinian city and has had 7 months of Palestinian violence against Israelis.

People on the right thought this was unfair to arrest a soldier who shot a terrorist, and thought this was like executing military personnel unfairly.  A video caught the scene.  Minutes earlier, Abdul and another terrorist were stabbing and wounding a soldier.  They were shot by a soldier.  Evidently, while down, the soldier shot Abdul again in the head without good reason as he was down.

The lawyers for the soldier said that he may have thought the terrorist was wearing explosives.  The facts came out that had he already been checked for a suicide belt, but no one in the video shows actions exhibiting any caution towards him.  The far right want the soldier released.

However, who is angry with the soldier?  The Top military brass of Israel.  They have strongly condemned his actions.  This happened during a wave of violence beginning in October which killed 201 Palestinians and 28 Israelis.  Most all of the Palestinians killed were carrying out knife, gun or car-ramming attacks.  The sentence came on Monday which said it had located and destroyed a tunnel that went from the Gaza Strip into Israeli territory, first discovered since the Gaza war in 2014.  The military has a strong code of Jewish ethics and keeps to it.  The tunnel  was built by Hamas terrorists.   32 tunnels had been discovered including 14 that extended into Israel.

This gets to my point today.  There are 2 levels of operation for nations in the world; political and religious venues.  What is each platform?  Have they always been in sinc with each other?  Israel was created as a much needed Jewish state after 2,000 years of it's population being beaten up for being Jewish by the world's religions and politics.  It's important to keep to the values.  Being a democratic state in the midst of none, they must allow the whole gamut of political parties, but the Knesset must stand behind the values of Judaism, which is highly moralistic.  They always have maintained their high moral values, especially when involved in the past wars with the terrorists of Gaza.   I can understand a young soldier in the heat of battle being scared enough to keep shooting, something so easy to do with his finger, but it was wrong to shoot a man when down when he could be taken alive.

Resource:  http://www.thenational.ae/world/middle-east/israel-soldier-who-shot-wounded-palestinian-charged-with-manslaughter
Newsweek
The Guardian
Posted by Nadene Goldfoot at 9:43 AM No comments: