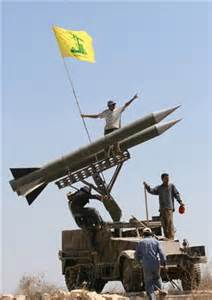 Hezbollah, founded in 1982 by the Iranian Revolutionary Guards, is located in Southern Lebanon but established by Iran.  They are next door neighbors to Syria.

They are responsible for all sorts of terrorist activities:

1. Shootings, rocket attacks, bombings, kidnappings, and suicide bombings.
2. 241 US marines were killed by suicide bombers driving a truck.
3. Bombing of US marine barracks and embassy in Beirut, 1983.
4. Beheading US CIA Chief, William Buckley, in Beirut, 1985
5. 29 killed in bombing of Israeli Embassy, Buenos Aires, 1992.
6. 96 killed in bombing of Israeli Cultural Center in Buenos Aires, 1994
7. 813 terrorist attacks, 1990-1995
8. 3 Israeli border guards kidnapped and murdered in 2000.
9. 183 terrorist attacks from May 2000 to May 2004.
10. Initiated a war across internationally recognized border of Israel by kidnapping 2 Israeli soldiers and killing 8 and shelling northern Israeli towns in 2006.

11.  Supports Palestinian terrorist groups.
a. Set up cells in Judea-Samaria and Gaza.
b. Continuously attacked across the Israel/Lebanon border

The rebels in the civil war in Syria do not want the government of Syria to get the shipment of missiles and jets from Russia that are due to arrive. Nine hours ago the Syrian rebels and Hezbollah, who is fighting on the side of the Syrian government,  exchanged fire in Lebanon.  About 15 were killed inside Lebanon near Baalbek of which only one was a Hezbolla terrorist.  "Thousands of civilians are believed to be trapped as pro-government forces - including Hezbollah fighters - battle rebels."  Meanwhile the Red Cross is mired in another city, Qusair,  that is being attacked.

Posted by Nadene Goldfoot at 2:39 PM