New Revealed Facts About Hamas and ISIS Plans Against Israel 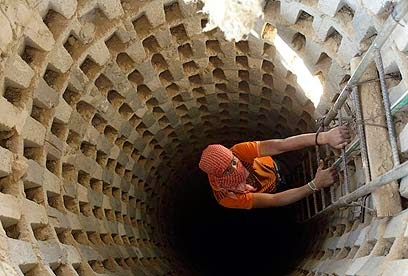 You'd think that the Palestinian Gazans would have heard or at least felt the vibrations of the electric jackhammers drilling 20 feet below the surface in creating their tunnels leading out to Israel for attacks.  Inside them were found thousands of weapons like Russian anti-tank missiles, explosive devices, tranquilizers, handcuffs, syringes and ropes.  One can only imagine what they would be used for once a terrorist popped up in Israel.

They were planning attacks for Rosh Hashana and Yom Kippur this year; September 24, 25, 26 and the 3rd and 4th of October.  One remembers that Yom Kippur was the date of the October 6, 1973 war.  This was when hoping to win back territory lost to Israel during the third Arab-Israeli war, in 1967, Egyptian and Syrian forces launched a coordinated attack against Israel on Yom Kippur, the holiest day in the Jewish calendar.  This is our day of fasting for 25 hours, even to be without water, and ask G-d's forgiveness of our sins.

Some tunnels were deep enough to hold vehicles.  They were reinforced with concrete made on site in workshops next to the tunnels.  They were command centers, armories filled with weapons, rocket-launcher hiding sites and  also acted as rooms to move and hid fighters during urban combat.

The tunnels were dug in parallel pairs with many shafts to the surface for many entry points.  In Gaza's center, the labyrinth allowed fighters to move unseen between homes and alleys.

Areas of Gazan cities were laced with hundreds of booby-traps.  Brigadier-General Mickey Edelstein, commander of the IDF Gaza Division, said that in a single street in Khan Yunis in southern Gaza, the IDF found booby-traps in 19 out of 28 homes.

"On 1 August 2014, Hamas militants emerging from a tunnel attacked an Israeli patrol in Rafah killing 2 Israeli soldiers. Israel at first believed that the militants had abducted Lieutenant Hadar Goldin and were holding him, but Israel later determined that Goldin had also been killed."

Three IDF soldiers entered a building marked as a UN Relief and Works Agency for Palestine Refugees. When they entered they were killed by an explosive device.

Hamas's largest known military control center was in the basement of a hospital.  IDF had to engage in very limited ground combat because the whole area was booby-trapped with explosives, ambushes and civilians that were used as targets by Hamas.

The Palestinian terrorists planned these tunnels for years and wanted to use them to hold kidnapped IDF soldiers. said Brigadier-General Moti Almoz.  Hamas wanted strategic blows more than psychological ones from just kidnapping, though.  They were out for jihad.

Their budget spent 40% for war preparations. $10 million was spent on tunnels.  800 tons of concrete was used on them.   Hamas worked with Iran in this.  They worked towards a coordinated attack of about 15,000 Hamas terrorists trained in Gaza.  From 2012, they have doubled their rocket arsenal.  They had hundreds of missiles with the range to reach Jerusalem and Tel Aviv according to Brigadier-General Itai Brun.  In March, they had bigger missiles on their way coming from Iran and sourced in Syria.  Their ship was intercepted by the Israeli Navy special forces in the Red Sea.  Now do people understand why ships have to be searched by Israel?

A mass terror attack has been averted by Operation Protective Edge.  Though about 2,000 Palestinians were killed in the Operation, they were all warned to get out of the way before the actual Israeli attacks.  Due to their leadership, they died.  It was not the plan of Israel to have this happen.  One cannot begin to comprehend the extent of Hamas behavior.

"The tunnels into Israel were constructed using the expertise of the Rafah families who have specialized in digging tunnels into Egypt for commerce and smuggling."

Now tunnels have been discovered in Judea and Samaria.  Some were stocked with bomb-making materials.  when John Kerry suggested last week that Israel must agree to a ceasefire including the end of the operation to find and destroy tunnels, it seemed to be a preposterous idea.  He was so far behind the known facts.

Israeli author Amos Oz is a famous pacifist in Israel.  Even he condemned Hamas for creating warfare in a civilian population of Gaza.  Naftali Bennett is the leader of the Jewish Home party and Israel's Economy Minister.  He said that "without the ground operation, we would have woken up one day to an Israeli 9/11."  Thank goodness for miracles like Operation Protective Edge which allowed Israel to discover the workings of Hamas.

The Media is not helping the situation.  They cover anything that smacks of finding fault with Israel, no matter what is going on.  Since about 2,000 Palestinians died in the operation of which about 1,000 were Hamas people, Israel is blamed.  Especially hard on Israel has been the death of so many children.  People forget it was Hamas who made sure these Palestinians suffered death for this very reason, to blame Israel for attacking.  The media forgets all this and just blames Israel for defending itself, making out that they were the aggressors just to be aggressive for no reason.

"In 2013-2014, Egypt's military has destroyed most of the 1,200 smuggling tunnels which were used to smuggle food, weapons and other goods into Gaza."  Israel has known about these tunnels and the money the Palestinians were making from them, even becoming millionaires, but were taken by surprise at the immensity of their digs in using them in warfare against Israel.  .  Israel restricted the importation of construction materials into the strip, to prevent their use for military purposes by Hamas. As a result, concrete and other construction materials were some of the main goods smuggled through the tunnels "

Israel also seems to be the only country worth reporting about.. In people's minds, Jews can do no right, therefore anti-Semitism is running rampant.   No one wants to bring to light the Muslims killing Muslims in Iraq and Syria.  In Syria alone there have been 120,000 and 170,000 people killed including more than 11,000 children.  The violence has gone into Iraq with massacres of prisoners by jihadis from IS.  CNN finally showed a video of a long single line of Iraq soldiers who were prisoners of ISIS who were shot and killed, Nazi style, after the 50 days of war in Gaza.

Sydney, Australia had chants of demonstrators waving the black flag of ISIS chanting, "Palestine is Muslim land...Jew and Christian will not stand...From Lakemba to Gaza...You can never stop Islam.  Do those people realize that if one is not of the Salafist Muslims they can be killed?  Imams in Iraq who were Sunnis have been killed by ISIS.  The Iraqi soldiers were Sunnis.  Stop Islam?  Stop one group of Islam who are against all the rest.  Evidently they want a caliphate with very few people in it to rule.  They're killing just about everyone who crosses their paths.  How do the terrorists know they aren't next?

Posted by Nadene Goldfoot at 2:43 PM No comments: