Explosion at Syrian Air Base with Missiles

Nadene Goldfoot
There has been an explosion Thursday night at a Syrian air defense base near Jableh, on the Mediterranean coastal province of Latakia.  This was reported by the Syrian Observatory for Human Rights who collects reports from oppositional activists.

"Hezbollah already has a reported 100,000 missiles of various ranges pointed at Israel despite the UN peacekeeping force (UNIFIL) having been charged since the end of the Israel-Hezbollah conflict in 2006 with ensuring that arms wouldn’t reach the internationally recognized terrorist organization."  fox news.  Assad has become very tight with Hezbollah, which worries Israel a great deal.

The media is reporting that it was caused by Israeli jets who were attacking missile launchers at this Syrian base.  Nothing has been confirmed, so it remains as gossip.  Whereas the USA leaked information about Israel purposely last time, there has been no mention of who did this so far.  Perhaps it's a surprise to them as well.

This same air base was also said to be hit by Israel on Halloween of last year because of Russian-made missiles directed towards Israel.

Posted by Nadene Goldfoot at 11:07 AM No comments: 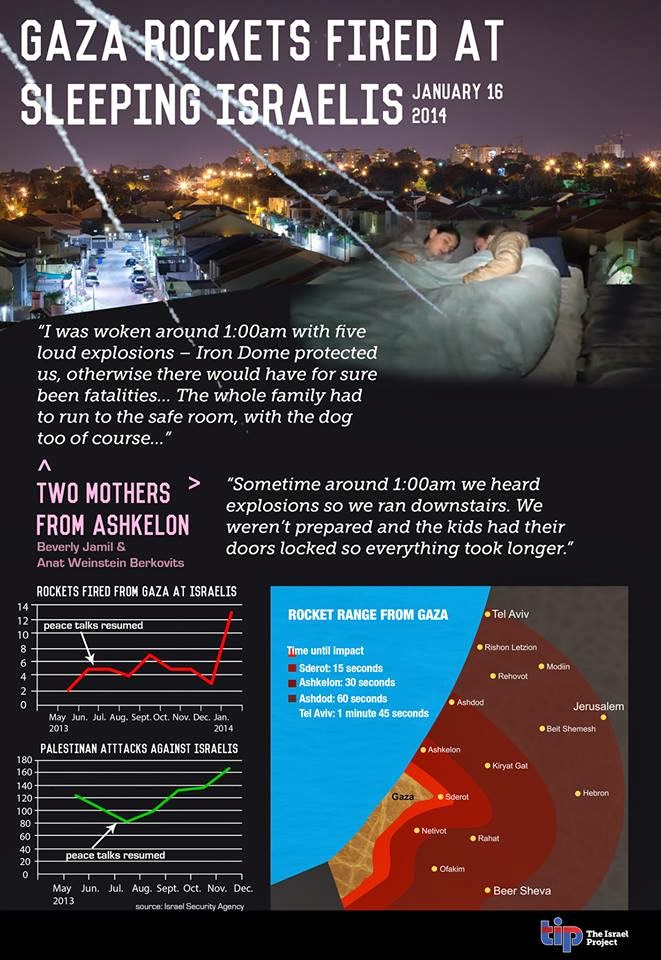 Four rockets were fired from Gaza onto Israel.  One is known to land in the Ashkelon area.  One more was counted, making five.
Posted by Nadene Goldfoot at 6:48 AM No comments:

Collecting rocks from a rock attack on vehicle

Our want-to-be neighbors, the Palestinians, have had a strange way of showing how we can all get along.   This year is starting off with a lot of attacks so that  Israelis are getting the message fast. The  attacks are not only from rockets, mortars and missiles.  Rocks can still be as deadly as they were for David with Goliath and they are used a lot against Israelis on a daily basis.  Below is an example of a day in the life of emergency medical assistants that go out and rescue give medical treatment if necessary in Israel.

January 12, 2014 What's going on near Jerusalem?  In the past few hours of this report,
1.Cars were being attacked between the Tunnel Road (which is the Jerusalem-Hevron Highway and El Hadar Junction.
2.  Rocks were thrown into the Baby Care Center in Bet Hadassah, Hevron.
3.  There were also rock attacks between Gilad Farm and Yitzhar causing damage but no injuries.
4. Rock attacks on IDF Forces were on the way to Har Bracha with no injuries.
5. A bus was attacked by rocks on Gush Etzion-Hevron Highway near Bet Umar which caused damage to the body of the bus and its window but there were no injuries.
6. Rock attacks by Mivtarei Harmeleh near Tekoa in the East Gush Etzion region with no injuries.
7. Road accident between 2 trucks and a private vehicle with only Arabs involved turned into an Arab confrontation near T Junction.  8 people slightly injured.
8. Thrown improvised grenade by Arab terrorists did not explode near Kever Rachel  with bomb squad working to disarm.
9. Rock attack from moving vehicle on T Junction, no injuries.
10. Fire bomb thrown on security fence of Opherit Base reported from Jerusalem Police, no injuries
11. Rock attacks near Na'alin.  One injured in head.  Treated by IDF.  Dr. lightly injured.
12. Rock attacks near Tachsin on Highway 55.  No injuries.

There have been attempted murders and these continuous attacks.  This incitement by the heads of the Palestinian Authority and the praise that they give the terrorists and turn them into heroes by their leadership only encourages murderous attacks on the Jews of Israel.

Such attacks are never reported by any press or even mentioned and this is a definite part of the Oslo Agenda.  Kerry will visit Israel and make out that the USA is concerned about the security and welfare of Israel but they don't know the half of it.  Are they aware of this nibbling away of constant attacks on civilians?  These on-going terror attacks only mean that the Palestinians will expect more gestures that will actually put the lives of the people of Judea, Samaria, Jordan Valley and Jerusalem in more danger by easing up the protection needed for them.

Resource:  Yehudit Tayar of Hatzalah Yehudah and Shomron, voluntary emergency medical organization with over 500 volunteer doctors, paramedics, medics on call 24/7.  They rescue anyone who needs medical assistance; civilians, military and Arabs within the PA territories.  To them, life is precious and they risk their own lives to rescue anyone in need.


Posted by Nadene Goldfoot at 1:56 PM No comments: