Messages From A Syrian Jew Trapped In Egypt

Title:  Messages From a Syrian Jew Trapped in Egypt, by Nadene Goldfoot and Jack Huffman, Storyteller.

This is the story of Vick,  who finds out his birth mother was Jewish and he's a Syrian in Damascus.  What he must do is flee to Egypt during the Civil War, but while there tries to find out how he can find his mother, who is reportedly in Israel.  Read about the history of Syrian Jews and what they had to endure as well as what's happening to Syrian refugees today.  You'll see what foods are prominent in the Syrian culture and be in on Vick's many amours.  Historic Fiction.  206 pages, 5X8 " pocketbook.
Available at amazon.com, Barnes & Noble, and publishers-Authorhouse; book and E-Book, Kindle. 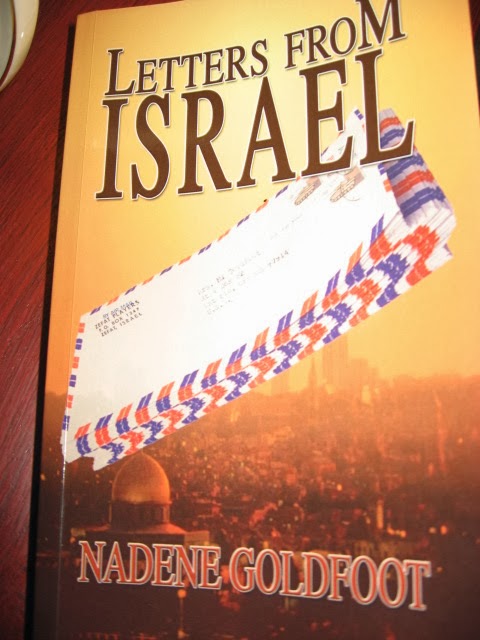 Letters From Israel by Nadene Goldfoot is a book I wrote using all the letters I wrote to my family from 1980 to the end of 1985.  It was published by 1st Books in 2003, 452 pages, now Authorhouse.

What happens when two middle-aged American West Coast Jewish teachers decide to make aliyah to Israel with their German shepherd without having first vacationed there?

When I started to read my letters that my mother had saved, I  cried.  She had saved them because they were so very interesting.   I put the letters back in the bag and stuck them away in my closet.  It was too painful to keep reading.  After a few months, I knew what I had to do:  write a book.

Read and find out what it was like to be in Israel during this period.  I was able to meet my illustrious cousin, Stanley Goldfoot, and hear his account of his life in Israel and what it was like to be the Chief of Intelligence for the Stern Group before Israel was created in 1948.  We were able to meet with my husband's illustrious cousin, also, the rabbi who had started Boys Town.

There was one book written earlier that was given to us to read when we were in the ulpan that told of a different family that had moved to Israel with their children.  Our story is quite different from theirs.

My husband and I and our German shepherd had made aliyah.  We were teachers in Oregon and went through classes in Haifa, where we lived for 10 months, to become certified teachers in Israel.  Danny was an actor from Miami, originally, so we started our own drama group and played in hotels across Israel with our shtick of a Laugh-In style act.   I wrote plays that we put on in Safed.  We were able to take in a lot of tourist attraction visits on weekends.  The most serious time was in being in the 1982 conflict with Lebanon, which was not too far from our home in Safed.

Going from conservative to orthodox in Safed and celebrating holidays like we had never celebrated before was our personal high experience.

The book is available to buy on http://www.amazon.com and other online bookstores.
Posted by Nadene Goldfoot at 3:58 PM No comments:

Nadene Goldfoot
The Taba border crossing is between Egypt and Israel and is near Eilat.  A tourist bus carrying 30 tourists of many nationalities suddenly exploded while on the Egyptian side killing 5 people of which 4 were from Korea and injuring 14 others.  Egypt has had to deal with terrorists from Jihad and al Qaeda more frequently since Morsi is on trial and has stirred up the Muslim Brotherhood to attack.  This happened Sunday, Egypt time.  Egypt is about 12 hours ahead of Pacific Standard Time.

"The bus was on its way to Israel at the time, after visiting St. Catherine’s monastery in the Sinai."  They believe a bomb exploded in front of the bus.

Resource:  http://www.jewishpress.com/news/breaking-news/bus-explodes-near-eilat/2014/02/16/
Posted by Nadene Goldfoot at 9:02 AM No comments: