Who Were the Philistines? Not to be Confused with Palestinians 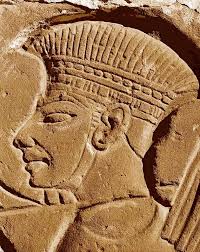 The Philistines were the enemy of Israel in the biblical days from the 12th and 11th centuries BCE.  "The Bible portrays them at one period of time as among the Kingdom of Israel's most dangerous enemies."  They were a Mediterranean people who first came from Asia Minor and Greek places.  They had sailed to the Middle East's Canaan in waves at different times.  One group came before Abraham had settled in Canaan and they settled south of Beersheba in Gerar where they fought against Abraham and his son, Isaac.

Another group came from the island of Crete after being kicked out of Egypt by Rameses III in the year 1194 BCE.  They had taken over the coastal area of Canaan where they founded 5 places:  Gaza, Ascalon (Ashkalon), Ashdod, Ekron, and Gath.

"Their highly-developed weapons brought a great threat to the Israelites. During the Exodus from Egypt, the Israelites purposely took a southern route to circumvent them.

By nature they were a fighting people of a sea-faring nation  and dominated parts of Judah in the period of the Judges which was a time before Saul was king of Israel.  Before Saul, the Israelites had judges, like Deborah who had decided what was best for the people.  Saul was able to temporarily defeat the Philistines. 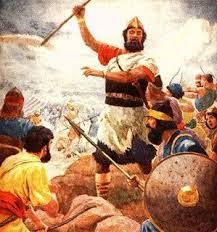 King Saul fought against the Philistines but was ultimately defeated.  After Saul, David was chosen as king and he ended the era of Philistines holding land and overran Philistia.  When the Israelite kingdom dissolved after King Solomon died in 920 BCE, and Judah was born out of the southern section of the kingdom, the Philistines re-established their independence but never became the serious enemy again.

Much later, in the Persian and Greek Periods, foreign settlers, mainly from the Mediterranean islands, overran the Philistine districts.  From the time of Herodotus, Greeks called Palestine after the Philistines.  The proper name was Syria Palaestina.

Under Hadrian, (Roman emperor from 117-138)  the Romans gave the name, Palestine,  officially to the former land of Judah, the southern section which today is officially Judea and Samaria.   Hadrian had fought against Judah's General Bar Kokhba and had an army of 35,000 to fight against the Jewish general.  The commander was Julius Severus.  They had come in from the Galilee and then fought actions for the Valley of Jezreel, Ephraim and the Judean Hills.  They eventually retook Jerusalem.

They had chosen the name of  Palestine because the Philistines had been a long time enemy of the Israelites, and the Romans wanted to erase the memory of the Jews living there.

This was in 135 when the Romans had to fight against General Bar Kokhba of the Jewish people and it had been the hardest fight they had had from any people.  Bar Kokhba had taken Jerusalem back.  He was a descendant of King David.

Incidentally, the word, Jews, comes from the tribe of Judah who had been living in what became the state of Judah since the other 10 tribes had been forcefully taken away by the major Assyrian attack in 722 and 721 BCE.

Our biblical hero, Samson, had to fight against the Philistines.  He was from the tribe of Dan and was an
Israelite judge.  From birth, he was sworn into being a Nazirite and had great strength and courage.  His feats against the Philistines showed the Israelites' desire for freedom from the Philistine suzerainty or domination.  At the end of his life he had fallen into the Philistine hands because of the woman he loved, Delilah, a Philistine woman.  She had told the Philistine soldiers the secret of Samson's strength and that was his long hair.  They had put his eyes out and Samson was forced to turn the prison mill.  All the Philistine population nearby made fun of him at a festival in Gaza.  He got his strength back and destroyed the building which helped to kill all the people, including himself.  (Judg. 13-16).

King David (1000-960 BCE)  had to fight against the Philistines.  At age 25, David was the armor-bearer for Saul.  His best friend was Saul's son, Jonathan.  He was famous for being able to be successful in fighting against the Philistines.  Because of this he was able to marry Saul's daughter,  Michal.  David succeeded in breaking the Philistine military power and annexed the entire coastal land belt to be part of Israel.  When David died, he was buried in Jerusalem.

David, when a young boy, had fought against the tallest Philistine in their army, the giant, Goliath.  He killed him with his slingshot, a hit to the right spot in the head.  Goliath was from Gath, one of the 5 Philistine cities in the southern coastal plain.  Gath was later taken by the Assyrian king Sargon in the 8th century BCE in their gigantic attack on Israel.  Gaza  City had also been taken by the Philistines.  It was only 2 miles from the sea.  Although it was allotted to the tribe of Judah by Moses-Joshua through G-d, it remained in Philistine hands and was the place of the imprisonment and death of Samson.  By 521 BCE it had gone from Sargon of Assyria to Cambyses of Persia.  Alexander the Great recolonized it as a hellenistic city by 332 BCE.  More people later were the rulers. 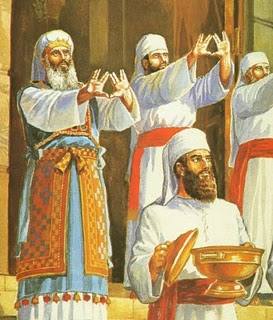 Eli, the high priest at the shrine of Shiloh and one of the last Judges in the 11th century BCE, was the mentor of Samuel.  He had a run-in with the Philistines.  He came to this high position at the age of 58 and died 40 years later as a result of falling from his chair when he heard that the Philistines had captured the Ark (I Sam. 4:13)

The land of Canaan was given to the Israelites by G-d's direction.  Abraham had put up his tent there originally.  Jacob and his family of 70 individuals  had had to go into Egypt from there in time of famine and was held against their will for 400 years as slaves of the Pharaoh.  They were to return.  The Canaanites themselves were a mixture of 11 different peoples. who lived in the area between the Nile and the Euphrates.  The people living in what was Syria used the name, Canaanites, for themselves.  These Canaanites were actually a mixture mainly of Horites, Hittites and Hebrews from the Hyksos period in the 17th century BCE.

The Canaanites were almost entirely obliterated or assimilated by the Israelites in the 13th century BCE, the Philistines along the coast in the 12th century BCE, and the Arameans in the North in the 11th century BCE.  The ones who survived these attacks became  subjects of Kings David and Solomon and were thus absorbed.  Later, the name of Canaanites was preserved only with the Sidonians and Phoenicians.  Like the Philistines, they are no more.  The land was not called  Palestine by the Israelites but Eretz Yisrael-the Land of Israel.  Syria was called " Aram."

Posted by Nadene Goldfoot at 11:41 AM No comments: