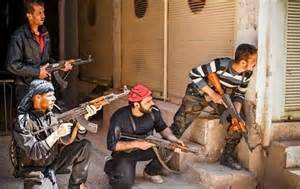 France is the first to confirm that the nerve gas, Sarin, was used many times and in a localized way in Syria.  This finding shows that it was used at least once by the government.  This information was finally confirmed to the media on Tuesday.  The civil war has been going on for 27 months to date.

Britain acknowledged later that their tests on samples from Syria tested positive for Sarin, too.

The problem has been of confirming what was suspicioned from a distance.  President Obama set the red line and it has been crossed, but by which side?   President Bashar Assad has not allowed any UN investigators into the country.  These confirmations come from samples brought out to be tested.  A UN team said it had "reasonable grounds" to suspect small scale use of toxic chemicals in at least 4 attacks in March and April.

Doctors were also interviewed and so were witnesses of these purported attacks.  There were also amateur videos brought out of Syria of the stricken.  Now they say they need direct samples from victims or from the sites of attacks.

Syria is thought to have the world's largest chemical weapons arsenals including mustard and nerve gas like Sarin, making this very serious for Israel, who has had to arm every citizen with gas masks and the directions for providing for themselves a safe room.

Sending weapons to the rebels is scary business because they are made up of Islamic militants as well who would not flinch at obtaining and keeping chemicals  and then later using them on Israel, for Islamic groups have been no friends to Israel at all.  France's Fabius feels that in one case, the regime and its allies were responsible for the attack.  Britain has found other chemicals, as well as Sarin, in their samples tested.

In the meantime, Assad's troops have advanced toward Qusair near the border with Lebanon and chased rebels from another district on the edge of Damascus on Tuesday.  Now the Syrian government is leading in this civil war that has taken over 80,000 lives so far.  The Syrian army is backed by Hezbollah fighters from Lebanon.  They have announced they have "eradicated the remnants of terrorists" of Qusair."