What Oslo Accords Failed to Do: Wrench in Progress for Kerry 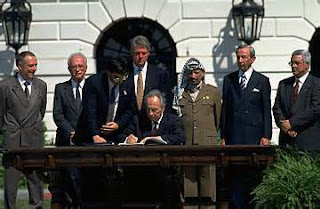 Twenty-five years ago in 1987, the First Intifada started.  It didn't stop until the Madrid Peace Conference.

Twenty years ago, on September 13, 1993 to be exact, Prime MinisterYitzchak Rabin and Simon Peres, Foreign Minister, along with Yasser Arafat and Mahmoud Abbas of the PLO (Palestinian Liberation Organization) were at the White House in Washington DC.  They all  signed the "Declaration of Principles" which had all been discussed in Oslo, Norway. Russia and the USA were co-signers.   It stipulated mutual recognition between Israel and the PLO.  The PLO were to stop terrorism and end it's covenant calling for Israel's destruction.

Israel had ratified this accord in the Knesset one week later.  Arafat never could get the PLO to ratify it, announcing this on October 7, 1993.


"The five-year transitional period would commence with Israeli withdrawal from the Gaza Strip and Jericho area. (This they have done.)  Permanent status negotiations would begin as soon as possible between Israel and the Palestinians. The negotiations would cover remaining issues, including: Jerusalem, Palestinian refugees, Israeli settlements, security arrangements, borders, relations and cooperation with other neighbors, and other issues of common interest."

Starting in  the year 2001, Israel was being attacked by rockets, mortars and missiles.  800 rockets rained down on Israel by 2005.  Attacks forced Israel's retaliation with Operation Rainbow and Operation Days of Penitence in May 2004.  In August and September 2005, Israel had pulled out of Gaza.  Since the pullout, there have been more than 12,800 rockets that have attacked southern Israel from there.  Operation Summer Rains from June 28th  to November 26th took place in 2006 when IDF soldier Gilat Shalit was captured.  "Israel's stated goals in Operation Summer Rains were to suppress the firing of Qassam rockets from Gaza into the western Negev  Attacks into Southern Israel have not stopped. 4,000 rockets had rained down on Israel since 2005.  Israel answered the attacks with Operation Autumn Clouds in 2006 and Operation Hot winter in 2008 and Operation Cast Lead in 2009.   Even though there was a cease fire from Operation Defensive Shield in November 21, 2012,  23 rockets and 7 mortars have been shot into Southern Israel in 2013 with only January free of them.  30 Israelis were killed, 1,500 were injured and all the residents have been traumatized.

This makes the PLO (today's Fatah)  still on the books in Israeli law as a terrorist entity because of not ratifying the Oslo accord.  This is also true in American Law being the Al-Aksa Martyrs Brigades of Fatah are listed as a terrorist organization.  Such groups are to forfeit US foreign aid assistance.

Two times the Palestinian National Council had never canceled the PLO Covenant.  So David Bedein, head of Israel Resource News Agency and director of Near East Policy Research,  brings up the issue of the fact that there is a reason to renew talks with the PLO or Fatah.   They need to ratify the Oslo Accord and to cancel the PLO covenant calling for Israel's destruction even before they decide to recognize Israel.

Already the Palestinians have let it out that a future Palestine is to have no Jews living in their territory.  They want East Jerusalem, or even have grandiose ideas of having all of Jerusalem.  The Palestinian officials want all Palestine refugees to return and be allowed in their territory.  This would be overcoming  and would drown Israel. There were few Palestinians in Palestine in 1948 and now there are millions.   They have produced textbooks with geography maps showing all of Israel as Palestine and teach hatred for Israelis and Jews.  Fatah and Hamas have no cooperation with each other let alone with Israel, and they have no proper resource for money other than donations from other Muslim countries and groups.  The occupation of so many have been in bomb making and that's about it.

One can see that these are very sensitive matters.    Kerry and Obama are pushing the oppositional Palestinians into discussions with Israel. Why is it so imperative that Fatah sit down to discuss peace with Israel when they haven't a united force for a Palestinian state?     How can Israel even consider being held to discussion with Hamas terrorists who wish to wipe them out?  Is this an act just to get something written on one's resume?

Mahmoud Abbas was first Prime Minister of Palestine and is now the president.  He has just ousted Salam Fayyad, Prime Minister and has replaced him with Rami Hamdallah, another Fatah member who is a USA educated economist.  They have discovered that they are just about bankrupt, owing far more money than a state should that hasn't even been officially  formed yet, even though google hadn't been aware of its standing as yet.

Peace is not ready to be served on the table.  There is much that the Palestinians have to do to become neighbors of Israel.  They're not showing their willingness to live in peace when they teach their children to hate Jews and Israelis as shown by their school textbooks and their cultural programs.  Peace will have to remain in the oven where it is simmering.

Posted by Nadene Goldfoot at 3:52 PM

My own daughter is confused, so maybe other readers are as well. Actually it is as confusing for me as it is for you. The truth is that Palestinians consider all of Israel as Palestine and they say we are occupying it. They want it all.

However, the Arabs want all of Judea and Samaria and eastern Jerusalem as well, which is part of Israel's capital. They want it for their Palestine. They do not want one single Jew in their "Palestine."

Why do they want it? Because the Jews have it. They covet what we have.
Do they need it? No. Jordan's population's majority are Palestinians. There are 48 Muslim majority states in the world, but only one Jewish one, and that is Israel. Do the Jews need it? Yes.

I should have said, ""The majority of Jordan's population is Palestinian."
The young king married a Palestinian lady. The Palestinians and Jordan fought a bloody war from Sept. 1970 to July 1971 called Black September.Arafat fought against King Hussein of Jordan and his PLO lost and were expelled. Thousands of PLO were killed in the battle, and many went to Lebanon. Question of whether or not Jordan should be called Palestine "The majority of Jordan's population is Palestinian."http://www.jpost.com/Opinion/Columnists/Should-Jordan-be-Palestine-310849. The king of course is not for that.