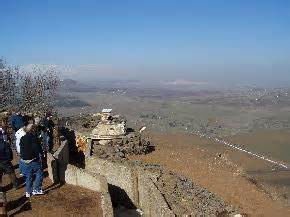 The Golan Heights, Israel has a border crossing along the Israeli-controlled land.  The Syrian rebels overran the border position near the abandoned town of Quneitra early yesterday and held their positions for several hours before the Syrian government troops retook it.  Its importance is that the peacekeepers receive most of their supplies through this position from Israel.  The fighting is also spilling over into Turkey and Lebanon as well.  It's only 1/2 mile away from Israel.

This actual fight caused the 377 international peacekeepers of Austria's contingent who maintain a 40 year old truce to decide to withdraw.  This has caused Israel to feel that they can soon be dragged into the Syrian civil war.  It is thought that the Russians will replace them.

From Israel one can see the Syrian tanks and armored vehicles right across the border.  They can hear the lage explosions all day and see thick smoke and flames rise.  Like back in the days of the American Civil War, tourists in Israel went to the Golan to look across the frontier and watch the fighting along with the TV stations.  Israeli IDF along the border were on high alert.

Night came and things calmed down.  Danny Danon, deputy defense minister of Israel said that they remained on high alert and are watching what is going on in Syria.  They are ready to protect Israel. "The Israeli military did not confirm the crossing was overrun by Syrian rebels, but said the area had been declared a "closed military zone" and was off-limits to journalists because of fighting nearby." Yahoo News

"Also Thursday, al-Qaida leader Ayman al-Zawahri tapped into the deepening Sunni-Shiite rift stemming from the conflict, calling on Sunnis everywhere to devote their lives, money and expertise to the overthrow the regime, set up Islamic rule in Syria and prevent a U.S.-allied government from taking over after Assad, whose regime is dominated by the Alawite sect, an offshoot group of Shiite Islam." Yahoo News

The Islamic militants have joined the rebels in trying to oust Bashar Assad.  The fear is that they will turn their guns on Israel if this despotic Assad is toppled.  The Syrian government could not guarantee support of the UN, Defense Minister Gerhard Klug said, explaining why they were withddrawing their troops from the station they were to protect.  They were a major contingent of peacekeepers.

There is more danger on the horizen.  Qaradawi, the terrible Muslim leader wanting to have all Jews killed, is entering the fracas.  Al-Qaradhawi Calls On Sunnis To Join Syrian Jihad: "How Can 100 Million Shi'ites Defeat 1.7 Billion [Sunni Muslims]?"

Sheikh Yousuf Al-Qaradhawi, the head of IUMS, also joined the attack on Hizbullah and called for jihad against it. In his Friday sermon on May 31, 2013, he called on young Muslims from around the world to travel to the Syrian city of Al-Qusayr in order to fight Hizbullah there, and said that it was illogical to abandon the Muslims (i.e., Sunni Muslims) in Syria while thousands were coming there to fight against them, referring to Hizbullah. Al-Qaradhawi added: "Anyone who can fight, should fight. I swear that if I could [fight] I would do so without hesitation." He even called the 'Alawites "bigger infidels than the Jews." Memri