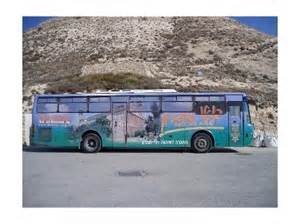 On about the 4th of June and again this morning, an Egged bus driving through Samaria was shot by a terrorist or terrorists.  The attack this morning happened again in  the Palestinian village of Harawa in northern Samaria which is south of Shechem.  Luckily, no one caught a bullet, but the police had to be called to investigate.

The rocket attacks starting up again in Gaza on Israel's westside are being helped by such shootings from Samaria. on Israel's eastside.

Egged buses also go through Ramat in East Jerusalem.  This is a picture taken in June of 2011.  There are even bullet-proof versions used for travel through Judea and Samaria.  Egged has 57 armoured buses.

Egged was started in 1933.  It is a cooperative owned by members and is the largest transit company in Israel.  Their buses go through most Israeli cities, towns, kibbutzim, moshavim and Judea and Samaria.

They have 2,861 regular buses and and make 25,767i trips per day for a million passengers.  Most people travel by bus and do not have cars.  They also have tourist buses.

Things are not always quite in Samaria. In April at Tapuah Junction Evyatar Borovsky,  from  the Jewish village of Yitzhar,  was stabbed to death  in his chest and stomach by Salam Azal,  Palestinian,  who then stole his gun.  Jews living here often find themselves at odds with Israeli security forces as well as the Palestinians.  It had been over a year since an Israeli was killed.  "From Yitzhar, located high up in the hills near Nablus, the Biblical city of Shechem, you can clearly see the entire Israeli coast. That’s why the site was chosen by the IDF to set up a Nahal community in 1983."  Since this town protects Israel below, the Palestinians would love to drive the people of Yitzhar out.

The group, Americans For a Safe Israel (AFSI) took a bus trip throughout all of Israel and Judea-Samaria starting on October 24, to November 2, 2010 and traveled by bus.  Their report tells all that they saw, including how the Arabs are squatting on land designated for Israel in the C section and how Jews were restricted but the Arabs weren't by the government in power then.  That tells me that Israel was going overboard in trying to keep the peace.  .