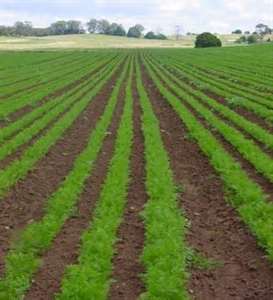 Nadene Goldfoot
At the end of the Six Day War of June 1967 when all the Arab countries attacked Israel, Israel won, not only the war but was able to take over Judea and Samaria as well as East Jerusalem and Gaza.

By September 1967 in Judaea and Samaria, over 40% of households-half of the total population-were registered as farmers.  This was an average of 30,000 men and 13,000 women, which was 39% of the region's working total.  Field crops filled 51% of all the tilled land with orchards more than 33%, vegetables about 6% and the rest was fallow.  The land under cultivation was 517,000 acres with only 4% of it irrigated.

In March 1971, Israel's Ministry of Agriculture, with their staff of 28 Israelis and 314 local employees, had a program to enhance yields, improve strains and acclimatize varieties that demanded much labor.  They worked to expand their export crops, especially in the Jordan Valley and to increase mechanization and encourage efficiency planning and instruction.

Yields of irrigated crops improved from 50% to 100%.  In the 1969/70 season, 1,000 tons of vegetables were exported.  Tobacco, babung, sesame and such industrial crops as cotton and sugar beets are now grown as well as new strains of wheat.  There is much more effective prevention of livestock ailments; cattle TB and foot and mouth disease especially.

The Gaza Strip and Northern Sinai had 50,000 acres cultivated in 1969/70 with 40% irrigated.  14% of all households were working the land, which meant 17,000 men and women or more than 1/3 of all the employed in the area.  Orchards occupied 30,000 acres.  vegetables, field crops and marrow-melon varieties were growing on the rest of the land.  Citrus was the main crop which covered 16,500 acres.  Over 6 million cases were shipped to regular markets or through the Israel Citrus Marketing Board.  3 packing plants were established; of which one was by an Israeli investor and the others by local growers.  They were expected to meet regional needs for a number of years.

The staff for this area was made up 11 Israelis and 171 local employees.  They did all they could to increase and improve crops.  Farmers were taken on tours of Israel, attended study days and visited experimental stations.  Israeli lecturers and instructors were tutored for work in the region.  They were able to see demonstration farms and 400 demonstration plots supplied seedlings and better seeds and gave practical lessons in advanced methods of production and agro-technics.  The Military Government lent many millions of pounds to hundreds of farmers.


Israel, however, was referred to as "Occupiers" by the outside world.  They must be the first occupiers in the world to try to help benefit people to learn to make a better living and learn a trade.  Israel was helping them, not harming them.

The response was that Hamas took over Gaza forcing every single Jew out on the promise of peace for all with the result of constant shelling of rockets, missiles and mortars onto Southern Israel.  So much for farming and earning a living and feeling responsible for one's own family.

Resource:  Facts About Israel 1973:  published by the division of Information, Ministry for Foreign Affairs, Jerusalem.

Posted by Nadene Goldfoot at 3:10 PM