Dome of the Rock in Jerusalem 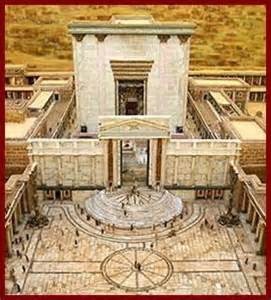 Nadene Goldfoot
King Solomon's Temple in Jerusalem
Another title for The Dome of the Rock is “The Mosque of Omar.  It is today a Moslem mosque built in the center of the  Jewish Temple area (al-Harim ash-Sherif) in Jerusalem by Caliph Abd al-Malik in about 738 CE to replace the temporary structure set up by Caliph Omar 100 years earlier.  It is situated on the traditional site of Mt. Moriah.

This is the site said to be the place where Abraham was about to sacrifice Isaac but was stopped by G-d.  It turned out to be a test to see how far he would go to obey G-d.  It also turned out to be a lesson that he and his followers were not to sacrifice children anymore.  For that is what the Canaanites were used to doing along with the Phoenicians.  The Muslims have another story in that it was Ishmael and not Isaac that was placed on the altar.  They have a big holiday to commemorate this event.

Omar was a 2nd caliph who ruled from 634-644 CE.  He conquered Palestine, Syria and Mesopotamia.  On his orders, most Jews were expelled from N. Arabia.  He is the one who made Jews into dhimmis or 2nd class citizens by having certain restrictions places on Jews.  They were excluded from public office, had to wear distinctive clothing marking them Jewish, could not built any new synagogues and other unpleasantries.  .

The Jewish Temple was first built by King Solomon of Israel who lived from 961 to 920 BCE and was the shrine to house the Ark, the sacred vessels and offerings and had a court for worshippers.  It consisted of a hall, shrine and inner sanctum (holy of holies).  It was completely destroyed by Nebuchadnezzar, King of Babylon  in 586 BCE and rebuilt from 538-515 BCE.  This 2nd Temple was done in the periods of Simon the Just, Judah the Maccaabee, Simon the Hasmonean and Herod.  This was done when Cyrus  permitted Jews to return to Eretz Yisrael.

In the siege of Jerusalem during the Roman war in 70 CE, the Temple served as a center of military activity and was destroyed by the Romans then.  A Roman temple was later built on the site.  Since the Moslem Period the Mosque of Omar has stood there.

The only time Jerusalem is thought of is in chapter 17 of the Koran that tells about the white animal like a horse, Baraq, who carried Mohammad to the Masjid al Aqsa, the farthest Mosque.  It does not say this mosque was in Jerusalem.  Mohammad was born in 570 CE and died in 632 CE.   The soonest the temporary mosque  built by Omar would have been built was in 638 CE when Mohammad was already deceased.  Later, Anas ib Malik wrote a similar story in the Hadith calling the mosque Bait Maqdis and mentioned Jerusalem as to where the mosque was.  Anas would have been a little boy at the time of this flight, so was going by hearsay for this writing at a time that a mosque had been built over the Temple.

Notice the use of Jerusalem, a Jewish capital and the word Beit, Hebrew for house of.  He could have been a Jew who was converted to Islam.  Mohammad had married Safia, who was Jewish at birth.  The influence of Judaism was pretty strong for Mohammad, as he copied much of our history and then altered it to capture the interest of his own people.  He would have heard Jewish stories in the towns of Mecca and Medina as there were several Jewish tribes there that dealt with the Arabs. 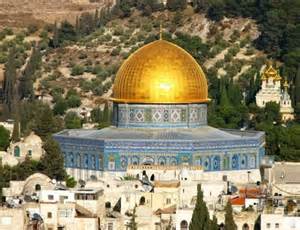 Dome of the Rock

Jews are not allowed to enter the Mosque.  They can give thanks to Moshe Dayan who was trying to be very Jewish and fair to the Muslims.  Jordan had to sanction anything out of the Mosque and Moshe didn't want to be like that. At the end of the 1967 War, Moshe "handed over the keys of the Temple Mount to the Waqf, the Muslim religious trust ..." The same went for the Cave of the Patriarchs.  He just hoped they wouldn't take advantage of Israel.

"Threatened by Arab countries, on January 5, 2012, Israeli authorities closed the Mughabri Bridge, preventing Jews and Christians from entering Temple Mount. Historically it should be noted that only under Israeli rule was the site open for everyone, Muslims, Christians and Jews. The Waqf is now attempting to deliberately destroy all archaeological evidence of Jewish claims to this site, while using terror and intimidation to impose its exclusive claim to Temple Mount."  The Temple Mount is the holiest site on earth according to Jewish tradition."  The Temple Mount means the Western Wall, also known as the Wailing Wall.  It is the wall that had surrounded the Temple.