SAMARIA; PAST AND PRESENT FOR JEWS; Dealing with Rock Throwing Arabs 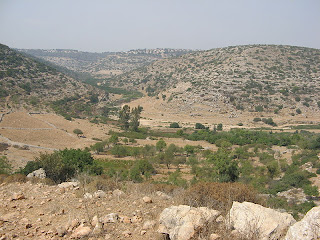 A view of the Kana Nature Reserve, Karnei Shomron. In Biblical times,
the Kana Stream (center) divided the tribal portions of Ephraim and Manasseh.
Nadene Goldfoot
Samaria,founded way after King Solomon had died in 920 BCE,  also called Shomron, Capital of the northern kingdom of Israel, founded in 880 BCE by King Omri (887-876 BCE) on a hill bought from Shemer.  It's cited in I Kings 16:24)  It fell in 721 BCE to Sargon II of Assyria.  He brought in another population while taking ours away.  It is where the ancient Jewish tribes of Judah, Benjamin, Ephraim and part of Menasseh lived, Judah being the largest of the 12 tribes.  It is the very heartland of our ancient Eretz Yisrael (Israel).  Leave it to the British who held the mandate after WWI.  They did not know enough to include this territory into the National Jewish Homeland possibly because our friend, Emir Feisal, wanted to create Transjordan at the same time.  He was friendly with us as long as he got his fair share of land for having fought with the British against the Ottoman Empire.  But what a piece!  Our heartland!

"The world declares that the Jewish settlements in Judea and Samaria are illegal and must be destroyed and the Jews relocated. They base their claim on either the Geneva Convention, UN General Assembly Resolution 181, UN Security Council Resolution 242, or any number of other documents. The facts, however, prove otherwise. The Jewish settlements in Judea and Samaria are, in fact, quite legal, under the provisions set forth in the previously mentioned documents and others, including the Balfour Declaration and the League of Nations Mandate for Palestine."

Are we Jews in Samaria illegally?  We think not.  "According to Eugene Rostow, a former Undersecretary of State for Political Affairs in the Johnson Administration, Resolution 242  gives Israel a legal right to be in the West Bank. The resolution “allows Israel to administer the territories” it won in 1967 “until 'a just and lasting peace in the Middle East' is achieved,” Rostow wrote in The New Republic (10/21/91). During the debate on the resolution, he added, “speaker after speaker made it clear that Israel was not to be forced back to the 'fragile' and 'vulnerable' [1949] Armistice Demarcation Lines.”"  Rostow is not alone.  There are many international lawyers who are in agreement with him.

"Perhaps the most significant of these decisions was the San Remo Resolution of 1920, which recognized the exclusive national rights of the Jewish People to the Land of Israel on the strength of their historical connection to the territory then known as Palestine. The outcome of this resolution was the 1922 Mandate for Palestine, an historical League of Nations document that formally established the legal right for Jews to settle anywhere in western Palestine, between the Jordan River and the Mediterranean Sea. This includes  all of Judea and Samaria."

Maayana Miskin writes of an attack that happened to a Bitons, a Jewish family driving along in their car in Yakir, Samaria by rock-throwing Arabs. The town was near Ariel. Ariel  is one of 5 large cities in Samaria.  It is only 10.3 miles away from the Green Line established after the 1967 attack on Israel.  Ariel was established in 1978 and now has a population of 18,000. It is 21 miles west of the Jordan River.   "It is composed of veterans and young Israelis, English-speaking immigrants, and immigrants from the former Soviet Union with an additional influx of 10,000 students.  It is the fourth largest Jewish city in the West Bank,  Yakir is a town with 260 families and the population is about 1,300. It was developed in 1981 and is an Orthodox Jewish community about 35 km (21 miles)  east of Tel Aviv.    Their two-year-old girl was critically wounded in a rock attack  on Thursday night and remains in extremely serious condition.

The girl, Adelle Biton, was in a car along with her mother and two older sisters, 6-year-old Naama and 4-year-old Avigail.  Adelle was most seriously hurt. Her mother suffered moderate-to-serious injuries and the two  girls are in moderate condition.All four were wounded when Arab men hurled rocks at a truck traveling the opposite direction, causing it to veer off course and hit their car.

“The two-year-old toddler is in critical condition,” a doctor at Beilinson hospital said. “We aren’t giving up, we’re doing everything we can to save her. We’re optimistic.”

Just minutes before the attack in which the family was injured, terrorists carried out a similar attack targeting a car driven by a man from Eli. That attack wounded a one-year-old baby boy. The child suffered light injuries and is expected to recover.

A former MK’s wife was hurt in a third rock attack Thursday. Aviva Hazan, who lives in Ariel, was hit in the eye by broken glass when terrorists hurled stones at a bus headed for Tel Aviv, breaking its windows.
The attacks Thursday led to renewed calls for the army to take rock attacks seriously and to change the rules of engagement to encourage soldiers to fire on rock-throwers. The IDF has since arrested 10 suspects in one of the attacks.

Israel administered Judea-Samaria and local affairs were administered by the local population.  Open bridges on the Jordan allowed movement in either direction between the areas and the Arab States.  Arabs and Israelis, who until 1967 had lived in mutual separation and estrangement, began after 1967 to enjoy the beginnings of a peaceful and fruitful co-existence.  The hope was that this would contribute towards a transformation of Arab-Israeli relations from conflict into cooperation.

As of February 14, 2013 the Jewish population numbers 360,000 of both Judea and Samaria.  It has had its problems.    Arab leaders, Fatah and Hamas have had other ideas. They want Judea, Samaria, Gaza and East Jerusalem as their Palestine and it is to be Judenrein, free of all Jews.  They want all Jews to move out.  Yet, at the same time, Fatah is broke.  They do not have money on their own but must depend on the other Arab states to give them money.  At the same time they teach their population through schools and TV programs to hate the Israelis.  This rock throwing is a good example of the ethics they are learning.

The rock throwers show their true goals of not accepting Israelis. However,  " Miri Maoz-Ovadia, spokesperson for the Binyamin Council, the largest council in Judea and Samaria, told Tazpit News Agency that the increase in the Jewish population growth rate is evidence of the prosperity of the region. “This prosperity has been supported by a development of joint industrial areas, shopping centers  open to all populations and an increase of tourism throughout the region. We hope that the development continues for the benefit of all residents living in Judea & Samaria.”"  Today's presence of an Arab population in Samaria should not in any way detract from the time-honored Jewish rights to this land.