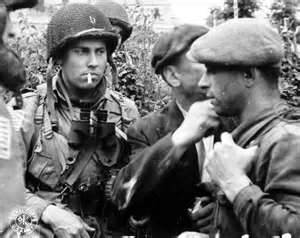 French Resistance Helping American Paratroopers
Nadene Goldfoot
The French Resistance Fighters from WWII have been compared to Hamas terrorists by the Jewish American Richard Falk b: 1930, a recently expelled member of the Human Rights Watch Committee in December.  This UN Special Rapporteur  has held this position since 2008.  This certainly is a slap in the face for these brave Frenchmen of whom most must be deceased by now.

He's a Jew attacking Israel and siding with Palestinian terrorists.  For a lawyer, he's just throwing out nonsense.  Palestinians were immigrants coming to find jobs from the newly arrived Jewish immigrants who were joining up with Jews that never left the land.  They were building and the Arabs wanted jobs.  Most had no connection to the land and had no ideas of creating a state until 1967. Only a few had land and most were nomads.   Jews had lived in this land since Moses led the Israelites out of Egypt and into the land, then called Canaan.  Saul was their first king in the 11th Century BCE..  David followed and then his son, Solomon.  Jews have a history here which is part of their religion, culture and history never forgotten.  Never forgotten except by Richard Falk, that is.

He also compared Israel's treatment of the Palestinians to the actions of the Nazis and told others that the US government may have had foreknowledge of the 9/11 attacks.   He is an 82 year old  former professor of International Law at Princeton U. which is amazing considering the stand he has taken against Israel that differs from many other international lawyers.  This man has been so critical of Israel that Israel had to finally say he wasn't even allowed in their country.

He makes anti-Israel statements that are picked up by the Liberal Democratic Friends for Palestine that attacks Israel and defends Hamas.

Falk wrote about Meshaal's visit to Gaza last month and offered excuses for this terror chief's pledge to recover the whole of historic Palestine no matter how long it might take by saying that Meshall used a fiery language in Gaza but was far more moderate in several interviews with Western journalists.  Evidently he believes only the moderate speech.

The moderate tone was of Meshal is highly impossible anyway.    He was offering a truce if Israel ended their occupation of the West Bank, East Jerusalem and Gaza and agree to uphold Palestinian rights under international law.

This was the Right of Return in which 4-5 million Palestinian refugees could flock into Israel.  He modified this by saying that "It would threaten the Jewish majority presence in Israel."  Evidently he's not concerned about that.  It's something that Israel will not go along with.

Falk wrote that Israelis should take the Gaza speech of Khaled Meshaal not as an expression of the Hamas creed but as outlining a unified and secular Palestine governed with human rights standards and the rule of law with respect to international law if there is going to be a 2 state solution in the near future.  I think Falk lives in La La Land.  There is no evidence at all that a terrorist organization such as Hamas who sacrifices its own people to gain their goals would do anything fit and proper.

The USA is not dealing with this terrorist organization.  Israel is not dealing with them, either.  It has been Abbas of Fatah who is the one that Netanyahu has wanted to speak with.  What on earth is Falk doing, playing up to Meshaal?  Well, something got him expelled from the UN position.  He wrote on his blog that he had been asked to resign by the organization "Human Rights Watch Committee." He tought it was because of his connection with the UN, which is contrary to HRW policy.  How nice to know for sure that they are contrary.  The difference is that we are on the Human Rights side and he isn't.  Certainly Hamas isn't.

Resource: http://www.algemeiner.com/2013/01/28/un-representative-richard-falk-compares-terror-group-hamas-to-wwii-french-resistance/
http://en.wikipedia.org/wiki/Richard_A._Falk
http://www.standwithus.com/Charter/     Stand With Us has a Free Copy of the  Hamas Charter.
Request your free copy of this StandWithUs booklet about the Hamas Charter! Write to shipping@standwithus.com
http://dissidentvoice.org/2012/12/watch-human-right-watch-a-tribute-to-professor-richard-falk/
http://www.jta.org/news/article/2012/12/18/3114871/richard-falk-removed-from-human-rights-watch-committee
From Time Immemorial by Joan Peters; tells just who the Palestinians were and where they came from.

Posted by Nadene Goldfoot at 8:05 PM