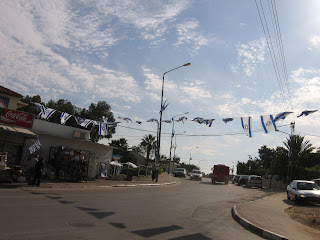 I feel that until the Palestinians accept Israel as a Jewish State and stop shooting into Israel, Israelis have a right to do whatever they need to do in their own country. Netanyahu said the same thing. Israel has been waiting for 60 years for acknowledgement from the Palestinians, and from all facts coming in, they have no intention ever of recognizing Israel and becoming peaceful. The more they shoot, the more I'd build, if I were Netanyahu. The picture above is of Sderot after an attack. There has been a lot of damage here and repair must take place. People are afraid and some are looking for safer places to live. They are right on the front line here.

The fact remains that Jews are returning to their country. They are the actual natives that were there since Moses led the Israelites back to Canaan. The Palestinians are a mixture of peoples who moved into the area when the Jewish settlers made their first aliyah back to Palestine in the late 1800's. There were a few people already living there, but not many. Most landowners lived abroad in France and other nice places in Europe. There wasn't any thrill in living in Palestine. Many landowners were only too happy to sell their land to the returning Jews, which is what they did. It was arid land with nothing in it. These people moved into the area to find work with the Jews who were rebuilding their country. They didn't have in mind any idea of creating their own country. They weren't a people, though most were Arabs. They were from the whole surrounding areas.

These settlements that Obama is so upset over happen to be on the very Jewish land of Judea and Samaria. We have a long and vital history connected with these places. How did we happen to have these areas as part of the original division of the land? We were attacked and the attackers lost. My advice would have been not to attack innocent people in the first place.

Originally we had two states: Judea and Israel. Our regained Israel was to be about four times larger than what it was finally whittled down to, and now the the world expects us to be happy with more slicing up of Israel and giving it to our neighbors who hate us. Appeasing these people isn't going to work. They weren't appeased with Gaza, were they?

Do they really want their own state? Do they really want the West Bank? It was so meaningful to us, and we had so much love for it, that we were willing to share it in 1948 in order to have a chance to live on a portion of it. We've had to shed a lot of blood since then, and we've hardened our hearts. We got that portion through legal lawful means and didn't have to attack any country to get it. We didn't oust any Indians like America did. We said, "STAY".

They didn't, and they attacked us. People, what do you want from us? Anyone ready to trade places with the Palestinians and be our good peaceful neighbors and let them have your space in your country? Well, Obama just wants us to be the givers and is allowing the Palestinians to be the takers. Of course I feel that this is completely wrong. It's not the course America has taken. Logic is not prevailing anymore. What is?