Palestine and Britain's Mishandling of Mandate

The Brits, led by General Allenby,  occupied Jerusalem in December 1917 during World War I.

After World War I, the Middle East, an Ottoman Empire possession, went to the winners of the war.  Britain was given the mandate for Palestine which was to last for 30 years.  They were to police the land and help the Jews create their Jewish Homeland, as Palestine was to go to the Jews.  Jews  had lost their land, Judea and Israel to the Romans in 70 CE  and had been homeless for 2,000 years.  They had been suffering from anti-Semitism wherever they went, so this had been legally arranged.

The Brits, in order to carry out this mandate, chose High Commissioners to govern Palestine.  They were Chief executive officials.  The first man to be appointed was a Jew, Sir Herbert Samuel (1870-1963) whose time ran from 1920 to 1925.  This appointment evoked great hopes among the Jews, especially as he was known to be a supporter of Zionism.  Samuels was the first Jew to be a member of a British cabinet and did so by 1909.  He had held office in the Liberal government from 1905 to 1916.  After being a High Commisioner in Palestine, he was in the national government from 1931 to 1932.  His memorandum to the Cabinet in 1914 influenced the Balfour Declaration.  He became the leader of the Liberal Party in the House of Commons from 1931 to 1935 and in the House of Lords from 1944 to 1955.

His initial task was complicated by the delay in confirming the Mandate and by Arab violence.  He suspended Jewish immigration, the very thing he was to allow and help to happen.  Why?  Arab violence had started in 1921.  Why did they riot? 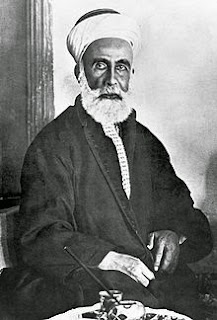 One of the first things Samuel did, obviously to get in tight with the Arabs who probably scared him, was to appoint Haj Mohammed Amin el-Husseini (1893-1974) as the Grand Mufi of Jerusalem and if that wasn't enough, also the head of the Supreme Moslem Council in 1921.  Husseini therefore had the title of Sherif of Jerusalem and The Grand Mufti of Jerusalem.  Samuel showed Husseini much benevolence.  Was it because he came from a long standing Jerusalemite Arab family that had traced their genealogy back to the grandson of Mohammad?    Why did he do this when he knew that in 30 years it was all to become a Jewish state?

Husseini was in direct opposition and competition with Emir Feisal, who was THE spokesman for all the Arabs.  He was for the Jews' return and had high hopes that they would be able to improve his people just by living there and showing them more modern ideas and ways.
Feisal had had meetings with Chaim Weizmann (1874 Belarus-1952 Israel).  Chaim had helped the English to win the war with his invention that made ammunition far better than the enemy had, and so was being rewarded for this by being heard.  It was all agreed upon.  All except the stone in the mix; Husseini,  who didn't want to give up his position as a very important man in Jerusalem and was afraid this would happen once more Jews moved there  and become a Jewish city once again.  He instigated riots in 1921.

This may have brought about the White Paper in June 1922. which followed a statement by Winston Churchill who was the present day secretary for the colonies.  It stated that the aim of the Balfour Declaration was to establish a Jewish National Home, but not Jewish domination.  He said that the Jews were there by right and not on sufferance.  It also made Jewish immigration into Palestine dependent on absorptive  capacity.  As a direct result of the White Paper, Transjordan was affected.   It detached Transjordan from Palestine and came as a large disappointment to the Jews.  The Balfour Declaration had included the area of  Transjordan.

The Balfour Declaration was part of the legal complexities that Jews had been wading through in order to be able to go back to their original land of Israel and Judea legally.  It was an official statement issued on November 2, 1917 at the end of World War I by the British secretary, Arthur James BALFOUR.  It had declared that the British government favored the establishment in Palestine of a national home for the Jewish people and would use their best endeavors to facilitate the achievement of this object, it being clearly understood that NOTHING shall be done which may prejudice the civil and religious rights of existing non-Jewish communities in Palestine, or the rights and political status enjoyed by Jews in any other country (thinking of the Jews of England who would not like to be rooted up from their homes and shipped off to this home.) such as Samuel.  Actually, this was setting up an unrealistic but idealistic Garden of Eden where Arabs would step aside for returning Jews.

This Declaration came about after LONG negotiations initiated by Chaim Weizmann, Nahum Sokolow and others shortly after the outbreak of World War I, with the support of Herbert Samuel, Chief Rabbi J.H. Hertz, the Haham Moses Gaster, and others.  There was much discussion on the formula of the Declaration and its timing.  Balfour visited the USA in Spring of 1917 and met with President Wilson who supported the efforts of the American Zionists who were headed by Louis Brandeis which expedited the final decision of the British government.

We had Jews at that time who were afraid of it happening and were against the idea.  They were the presidents of the Board of Deputies of British Jews and of the Anglo-Jewish Association.  DL Alexander and CG Montefiore issued a statement that the Zionist aspirations were calculated to endanger the Jewish position in all countries.  All countries meant the Western of USA and England, evidently, for pogroms and anti-Semitism were going great in France and Russia.  All this rebuttal made Britain even more cautious, so they didn't accept the wording from the Zionists that said:
1. To recognize Palestine as "the national home of the Jewish people"
2. For providing a "Jewish National Colonizing Corporation" for the resettlement and economic development of the country.

The Declaration, after having finally been approved by the British cabinet, was sent to Lord Walter Rothchild who was asked to convey it to the Zionist Federation.  It was approved by other Allied governments and incorporated in the Mandate in 1922.

Samuel did a few helpful things such as erecting the structure of the new Palestine, creating a solid governmental machinery and turning a chaotic country into an organized state, good for England but not for the future of the Jews.  The foundations of the Jewish National Home were  firmly laid down during his term of office.

Lord Plumer was the 2nd High Commissioner from 1925 to 1928.  He, on the other hand, refused to restrict Jewish immigration and displayed much administrative energy.  Under his rule, Palestine citizenship provisos were laid down.  A water supply for Jerusalem was installed.  Public works schemes were inaugurated to meet the threat of unemployment.

Sir John Chancellor was the 3rd High Commissioner from 1928 to 1931.  1929 was a year of much rioting and deaths of Jews, instigated again by the Grand Mufti.  Chancellor condemned the 1929 Arab massacres in outspoken terms.  They had happened when he was away on leave, but later was inclined to temporize.

Sir Arthur Wauchope was the 4th High Commissioner from 1931 to 1937.  He was sympathetic to Jewish aspirations while being scrupulously fair to the Arabs.   I note that Nazis were gaining power in Germany at this time, and by 1937, things were terrible for Jews living there.  They were trying to emigrate from Germany and many wanted to come to Palestine and found it difficult to get in there or to the USA.  During Wauchope's period of office, the stream of immigrants rapidly increased, naturally.

This led to Arab restiveness which he tried to pacify by promising a Legislative Council.  He failed to quell the Arab revolt of 1936, again led by the Grand Mufti and this led to the end of his position.  In 1936, Husseini was chairman of the Arab Supreme Council so  had organized the Palestine disturbances for which he was sentenced to exile in 1937.  He fled to Lebanon.

Sir Harold MacMichael (1882-1969)  was the 5th High Commissioner from 1938 to 1944. He was 56 when he took the post.  These were the war years.  He was the man in office during the war who refused to admit Jewish refugees from Europe.  This made him very unpopular with the Jewish population.  He was blamed for sending at least 768 Jewish refugees aboard MV Struma to their deaths. It was an "illegal" immigrant ship which left Romania in 1941 for Palestine and reached Istanbul, Turkey but were turned back.  It was MacMichael who had refused them entry into Palestine. The boat floundered in the Black Sea with the loss of all on board.  Seven unsuccessful attempts, mainly by Lehi (Stern Gang/Stern Group) , were undertaken to assassinate him during his sojourn in Palestine. In the last, both he and his wife narrowly escaped death in an ambush Lehi mounted on 8 August 1944 on the eve of his replacement as High Commissioner.

Viscount Gort was the 6th High Commissioner from 1944 to 1945.  He was sympathetic for the Jews, but was unable to make a fundamental change in the British government's policy.

Sir Alan Cunningham was the 7th and last High Commissioner from 1945 to 1948.  On May 14, he and his soldiers left.  He governed the country throughout the eventful happenings which culminated in the British withdrawal from Palestine.  By 1946, the population of Jerusalem reached 165,000 of whom 100,000 were Jews.  The city expanded and the Hebrew University was erected on Mt. Scopus.  This was a period of Jewish resistance to the  British Mandatory government.  The UN partition resolution of November 29, 1947 provided for the creation of an independent area of Jerusalem under the UN administration.  Arab outbreaks which were exactly like warfare were between the Haganah and the Arabs who had developed into the Arab Legion of Transjordan  seemed to put an end to this international scheme.  During that time, the Jewish quarter in the Old City had to be evacuated and was destroyed.  The rest of Jerusalem fell into Jewish hands.  The Arab Legion was shelling and starving the Jews in trying to get them  to surrender, but that was foiled by the fortitude of the Jews and by the opening of the Burma Road which restored the connection between Jewish Jerusalem and the coast.

Husseini, the Grand Mufti,  participated in Rashid Ali's pro-Axis coup in Iraq during World War II before he went to Europe, where he assisted Hitler and was largely responsible for the liquidation of the Jews in the Moslem areas of Bosnia.  In 1946 he escaped to Egypt.  Now we see Gaza was also affected by him.  After 1948, he set up a Palestine Government in Gaza, but it was short-lived.  Later, he set one up in Cairo, Egypt.  All this power was given to him by Samuel.  Evidently Samuel didn't vet him.

Posted by Nadene Goldfoot at 10:33 AM