Anakim, The Giants of Canaan 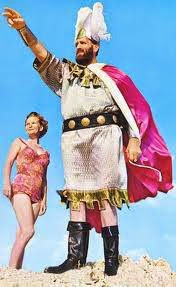 According to biblical tradition, there were giants living in Canaan long before it was conquered by Joshua and the Israelites.  They were called the Anakim, which today just means in Hebrew: giants.

They lived in Canaan's mountainous area of Judah.  Also, they were found in the southern coastal zone. These giants  lived in the south,  near Hebron (Gen. 23:2; Josh. 15:13). According to Gen. 14:5-6 they lived in the land of Edom (around Mt. Seir, south of the Dead Sea bordering on the Red Sea at Elath and Ezion Geber, descendants of Esau, and were hunters).

They also lived in  Moab (country in southern Transjordan bounded by the river Heshbon in the north and the river Zered in the south, the Jordan and Dead Sea to the West and the Syrian Desert on the east.  They were kinfolk to the Israelites, descendants of Lot.  They had settled in their land which had been captured from the Rephaim in the days of Abraham.  Rephaim were an ancient people living in Transjordania in the time of Abraham.  Some of the settled near Jerusalem in the Valley of Rephaim.

The Israelites seem to have identified them with the Nephilim, the giants (Gen 6:4),  they were a semi-legendary race in the antediluvian era  who sprung from the union of the "sons of G-d" and the "daughters of man." as myths may have taught before Judaism.   This took place before the FLOOD.  "The Nephilim were on the earth in those days--Actually, it referred to  the rulers of the day--and also afterward when  the sons of the rulers (princes and judges) would consort with the daughters of man (of the general populace) , who would bear to them.  They were the mighty who, from old, were men of devastation."

( Numbers 13:33) of the antediluvian age. The Land through which we have passed, to spy it out, is a land that devours its inhabitants!  All the people that we saw in it were huge!  There we saw the Nephilim, the sons of the giant from among the Nephilim;  we were like grasshoppers in our eyes, and so we were in their eyes!"

Joshua finally expelled them from the land, excepting a remnant that found a refuge in the cities of Gaza, Gath, and Ashdod (Josh 11:22.)  Young David fought a Philistine giant Goliath  with his slingshot and killed him, saving his people.

The Anakim  are said to have come from 3 clans;  Sheshai, Ahiman and Talmai, which are Aramaic names of 3 sons.  They were thought to come from a branch of the Rephaim.   The city of Debir, previously called Kiriath-Sepher, was their city.  "Debir has not been discovered with certainty in modern times; but about three miles to the west of Hebron is a deep and secluded valley called the Wady Nunkur , enclosed on the north by hills, of which one bears a name certainly suggestive of Debir--Dewir-ban."  "Judging from the names, it appears to have been some sacred place among the Canaanites, and a repository of their records."

Caleb drove out the 3 sons of Anak from there, Sheshai, Ahiman and Talmai, the offspring of the Anak.  He went from there to the people of Debir.  The former name of Debir was Kiriath-sefer.  Caleb said, "Whoever conquers Kiriath-sefer, I shall give him my daughter, Achsah as a wife."  Othniel, son of Kenaz, brother of Caleb, conquered it and won himself a wife.  Caleb and Othniel were half brothers through their mother.  Kenaz was the father of Othniel and the stepfather of Caleb.  .

Debir is included in the list of priestly Levitical cities, and this is found in Josh. 21:15. Today it is commonly identified with Khirbet Rabud, southwest of Hebron.   "Debir has been identified with the modern Edh-Dhaheriyeh, i.e., "the well on the ridge", to the south of Hebron.  "There seems to be several places identified as the site of Debir.

Og, king of Bashan, was described as being extremely tall.  He was supposed to be the last of the Rephaim (Deut. 3:11). He was an Amorite king of the land of Rephaim in Bashan and Gilead.  He had attempted to interrupt the march of the Israelites but was defeated.  The land of Og was a strongly fortified territory throughout the Middle and late Bronze Ages.   Later giants were Goliath who was 6 cubits and a span tall (I Sam. 17) and  Ishbi-benob was another one

(II Sam : 21:16). The Philistines again made war with Israel.  David and his servants went down and fought with the Philistines, and David became faint.  Ishbi-benob-who was one of the children of the giant, and whose spear weighed 300 copper weights and who was girded with a new sword-declared that he would strike down David.  Abishai, son of Zeruiah, came to his aid and he struck the Philistine, killing him."  It was customary for a warrior to kill someone on his first day in battle, in order to become fully initiated into the army.  Ishbi-benob chose the exhausted David as his victim.  The giants   (2 Samuel 21:15-22 ) were descendants of the Anakim.

II Sam: 21:19) There was another war with the Philistines in Gob, and Elhanan, son of Jaare-oregim, the Bethlehemite, struck down the brother of Goliath of Gath, who had a spear with a shaft like a weaver's beam. This giant's name was Lahmi.

There was another war in Gath.  There was a man of huge dimensions,  whose fingers and toes were 6 each, 24 in number.  He, too, was born to the giant.  He ridiculed Israel, and Jonathan, the son of David's brother, Shimea, struck him down.

A man who is 6'3" tall is a nice tall man these days.  If people are deprived of the right nutrients, they tend to not achieve their full potential height.  The 12 spies that Joshua sent to look into Canaan must have been pretty short, for they reported back that it was populated by giants, for they must have seen the people of the 3 clans.  (Judges 1:10) (Numbers 13:22) and (Numbers 13:33) (Gen. 6:4).