Britain was chosen to rule over Palestine for 30 years with the mandate.  It would end in May 1948, having started May 1918.  Britain had expulsed Jews from their own land in 1290 and hadn't let them back in till 1655!  During that whole time the only Jews allowed in England were physicians, and at that only a few for desperate titled gentlemen.


Look at these facts:  Jews were an unwanted people constantly thought of as scapegoats.  There existed some Jews who had not wandered all over the face of this earth.
They remained in Palestine.The time had come when other Jews decided to join them because of being tired of attacks.

The League of Nations, the world's first try of a United Nations, a world organization of getting the consensus of the world to unite against wars thinking wise heads could prevent them, had decided to choose policemen to oversee Palestine after the First World War.  Enough wars, they they thought.  Britain was selected to police or rule over the country, a country once ruled for 400 years by the Ottoman Empire, a Turkish ruled empire.  The Ottoman Empire had sided with the Axis during WWI, the German-led side of the war and they had lost.  This meant that the Ottoman Empire lost their land to the Allies of the world.  Now it was in their hands; a western people handling Middle-eastern people.

The only way people knew anything about Jews was through Shakespeare's rendition with Shylock.  "Shylock is a character in William Shakespeare's play The Merchant of Venice (c. 1600). A Venetian Jewish moneylender, Shylock is the play's principal antagonist. His defeat and conversion to Christianity form the climax of the story."

He's made out to be a very bad person in the play.  Being a money-lender is another story.  Christianity had taken a position of not allowing Jews to make a living in any other way other than the despicable underhanded advocation of being a money-lender, something beneath Christian society.  Jews couldn't own land, couldn't farm, so had this as a profession along with peddling.

The world's 1st Israel was settled by 601,730 Jewish slaves of Egypt led by Moses to the Promised Land which was actually Canaan, the land their forefather, Jacob and his band of 70 had left during a famine.    This happened over 3,000 years ago.  It took them 40 years to reach it.

Obstacles like lions and persuasive women tantalizing the men to stop,  and hostile people they encountered,  made the trip dangerous.  Feeding this many was also a problem so they were given Manna to eat.

In 1948, Israel was born again in the same land, now called Palestine, named by the Romans for the Jews' enemy, the Philistines, with a population of 650,000 Jews.  They also had a great need to possess their own homeland after 3,000 years of wandering. 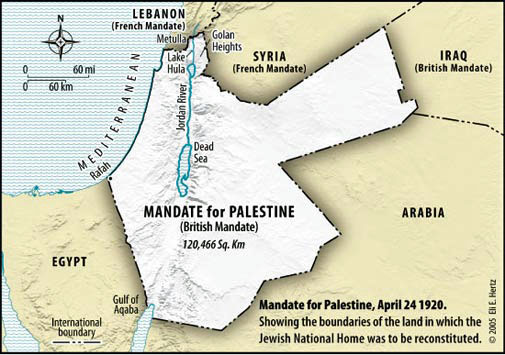 Do you see why we love our Torah?  How did this happen that Israel had broken apart when King Solomon died into 2 parts;  Israel of the north and Judah of the south,  only to come together again and go through a tough rebirth on May 14, 1948?  The only problem was the the map didn't give the Jews their original Judea and Samaria!  This was called the West Bank by Jordan.

The Twentieth Century was a turn-around for Jews.  In 1897, Theodor Herzl, Hungarian newspaper reporter,  organized in Basle, Switzerland, the 1st Zionist Congress and founded the World Zionist Organization.  (Zion is another name for Jerusalem and for the entire land.)  Zionism came about as an answer to severe events of continued oppression and outbreaks of persecution (pogroms) in Eastern Europe within severe Jewish poverty.  The goal was the return of Jews to the Land and the revival in it of Jewish national iffe; socially, culturally, economically and politically.  As we say during Purim (Passover): Enough already!  Jews started returning.

King Hussein of the Hejaz, wrote: "We saw the Jews....streaming to Palestine from Russia, Germany, Austria, Spain, America....The cause of causes could not escape those who had the gift of deeper insight;  they knew that the country was for its original sons, for all their differences, a sacred and beloved homeland."  (Al qibla, Mecca, #183,  23 March 1918.  George Antonius, ARAB AWAKENING, p. 269.)

World War I-1914-1918
A War between the Allies and the Axis
"On November 2, 1917, the British Balfour Declaration promised to support the establishment of a Jewish national home in Ottoman-controlled Palestine in this letter to Lord Rothschild.

"His majesty's Government view with favour the establishment in Palestine of a national home for the Jewish people."

This was in order to win Jewish support for Britain's First World War effort which was already baled out by the Jewish chemist,  Chaim Weizmann, who created  a special ammunition more powerful than others had for England which won the war for the allies.  The British had also made a promise to the Arabs that a united Arab country, covering most of the Arab Middle East, would result if the Ottoman Turks were defeated.  The Brits broke their promises to both the Jews and the Arabs.
Britain was at war.  Balfour's Declaration gave Jews reason to support them as they were supporting the Jews.  Britain also needed Arab support because Arabs made up more than half the population of the Ottoman Empire.  Britain put themselves in a jackpot by making two opposite promises to these two people.
The Declaration was approved by the British cabinet and was given to Lord Walter Rothschild to convey it to the Zionist Federation.  It was approved by other Allied governments and incorporated in the Mandate in 1922.

The 30 year mandate had a hook in it.  The Brits were to help the Jews to create their Jewish Homeland in those 30 years.  That was the promise of the League of Nations.  This hadn't been easy to come by.  It took many meetings of the Jewish leaders  like Chaim Weizmann, Nahum Sokolow and others after WWI had started to make contact with the allies to gain such a position.  They had seen a window with possibilities of opening for them after going for 2,000 years without a country for their people.  Yes, they were a people; not just a religion.  They had their own culture, language, family ties and their own religion.  They would have been a proselytizing religion had they not been prevented from doing so by the Roman Christian emperors.  They had once been an empire as well.  They were the only ancient Middle Eastern people who still existed.
Right after the war in 1921 the Arabs rioted against the Jews mostly in Jerusalem and Safed.  The 1st British High Commissioner for Palestine was Sir Herbert Samuel, an English reformed Jew.  He had kept pretty good law and order, but he left in 1925.  Then the British favoritism for the Arabs was more apparent.  By 1929, Arabs were led by  Haj Amin al-Husseini, the Grand Mufti of Jerusalem,  and rioted in Jerusalem, Hebron and Safed with longer and brutal killings by attacking the unarmed in these cities.  133 Jews were massacred.  Over 200 were wounded.  Jewish property was destroyed.

The Brits did nothing to punish rioters or prevent more riots.  Violence was the worst in 1936 when Germany was undergoing attacks on Jews.  The Jews in Hebron, a holy city to Jews where Abraham buried his wife, Sarah and one of the cities of cited as a city of refuge as well as once being King David's capital, were
driven out or killed.  After 1,000 years, Hebron had no Jews living there.

The Brits then did a terrible thing.  In 1939, Great Britain issued their "White Paper", stating that England intended to set up an independent state in Palestine in 10 years with a permanent Arab majority.  They were there to be setting up the Jewish Homeland!  This was truly a double-cross.  In 1939 Germany was invading Poland!  Jews had been suffering greatly in the last 3 years in Germany.  My own uncle got out of Germany in May 1939 and may have been the last Jew to do so as the doors closed on them after that.  The Germans had them all as captives, and the doors of Auschwitz were already open-my uncle had been in there!

The White Paper went on to announce that Jewish immigration would be cut back to 15,000 per year for 5 years;  Then NO MORE Jewish immigrants in Palestine by 1944.  Starting then, land sales to Jews would be restricted or forbidden.  This policy guided British policy behavior in the coming years.  It was the same old anti-Semitism Jews had been enduring for the past 2,000 years!  The Brits had completely turned around 180 degrees in their original responsibility from the world's nations in developing the Jewish Homeland.  The Brit responsible for the White Paper was Neville Chamberlain, who was scared off by the riots from 36 to 39, and he was the  Prime Minister of the United Kingdom from May 1937 to May 1940. He is best known for his foreign policy of appeasement. He is well-known for trusting the Germans not to invade Europe.

The newcomers were very active in the building of Tel-Aviv and also founded kibbutzim (collective villages).

On the eve of WWI  1914, the 80,000 Jews of Palestine constituted only a tenth of the country’s total population.

Moreover, Jewish immigration to Palestine constituted only 3 percent of the transoceanic Jewish migration during that period. By way of comparison, of the 2,367,000 Jews who left Europe then, 2,022,000 established themselves in the US.
Why?  Palestine was made of deserts, swamps, flies, mosquitoes, malaria and weeds and Turkish police.
USA was paved with gold and democracy and freedom.

1914-1918: With WWI and the subsequent famine, Palestine’s total population dropped. Its Jewish community now numbered only  60,000.

By 1948 when Israel was pronounced a state among other nations, the Arab states expelled their Jewish subjects in anger.  Entire Jewish communities were without a country so came home to the new Israel,
including 121,000 out of 130,000 of the Jews in Iraq,
44,000 of out 45,000 of the Jews of Yemen,
30,500 out of 35,000 of the Jews of Libya,
165,000 Jews came from Morocco, Tunisia, Poland and others from 1955-1957.
Between 1961-1964, 215,056 Jews came mostly from Eastern Europe and North Africa.
Since the miracle of 1967's War, Israel had a new wave of immigration from North and South America, Western Europe and the Soviet Union.
Almost 700,000 immigrants had arrived in Israel, almost half the total, came as destitute refugees from Moslem countries.
The number matches that of the Palestinian Arabs who became refugees in 1948.