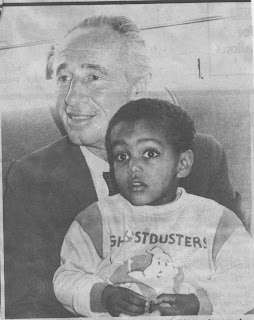 Nadene Goldfoot
Premier Peres poses with young Haim in Upper Nazareth on March 26, 1985. They are immigrants from Ethiopia. They were flown to Israel and many also were moved into Safed, Israel, where I lived. They came dressed in white sheets and were barefoot. In no time at all they learned Hebrew and how to shop in supermarkets. People set up clothing shops in their apartments and they were able to acquire western style clothing this way. While I lived in Safed, they put on an art display of things they had made.

The story is that when they landed in Israel they wondered where the Jewish women were. They were not used to seeing women wearing slacks, which many do.

On June 13, 2007 Shimon Peres was elected the 9th president of Israel. He was a former prime minister and Nobel laureate.
He has had a six-decade political career.
Posted by Nadene Goldfoot at 11:01 PM

Email ThisBlogThis!Share to TwitterShare to FacebookShare to Pinterest
Labels: Israel with Premier Peres and Haim from Ethiopia, Upper Nazareth