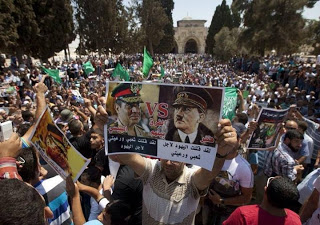 The Temple Mount, an area off limits to Jews by the design of Israel's own government in an act of fairness and sensitivity to their minority Muslim population, was a scene of aggressive anti-Israel rhetoric and hatefulness by Arab Israelis towards their fellow Jewish citizens today.

The Arabs there were getting in on the act of demonstrating for Morsi, the past leader of the Muslim Brotherhood and ousted President by the Egyptian Military who has taken over in an interim position until new elections.  In the poster They are comparing Hitler with the commander in Chief of Egypt's army, Abdel Fattah el-Sisi. 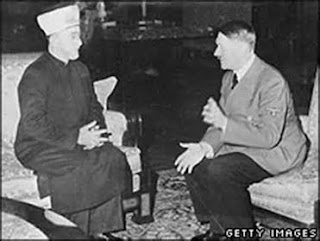 King  Abdullah I of Jordan, a distant relative,  had to remove the Grand Mufti from this position and banned him from Jerusalem.  It was Abdullah who was in agreement in Israel's creation, but he had turned against the idea when he saw that Britain had promised the Jews more land than he was led to believe.  Neither the Jews nor Abdullah saw promises from Britain come to fruition.  In the end it was the Jews who accepted the lot while the Arabs did not.

Egypt does not think of the ousting of Morsi as a coup.  As one government employee, Ahmed Ragab,  in Cairo puts it, "If you have roaches in the kitchen that are eating away at your food,, what do you do?  You spray them,"  he said.  "These are not Islamists.  They are terrorists."

The Muslim Brotherhood's charter has as its goal to destroy Israel, so anyone sticking up for the Military on the Temple Mount was taunted by them to be on the side of Jews.  Yet here they all are, freely demonstrating without being carried off to the police station or hit with a baton, right in Israel.  They are not even free to do that in Egypt, and for many reasons.  There it has turned into a war with the Muslim Brotherhood behaving like terrorists and instigating all the fight against the citizens of Egypt along with the military.  The demonstrations in Egypt have turned into savage death events.

Cairo, a city of over 18 million people, has almost 3 times the population of Israel's 7 million.  Egypt has continued to have a peace pact with Israel since Sadat, who came to Israel in a show of sincere peace  and spoke to the Knesset on November 20, 1977.  Egypt's total population is about 91 million people.

"El-Sisi was the youngest member of the Supreme Council of the Armed Forces of Egypt. On 12 August 2012, Egyptian president Mohamed Morsi took a decision to replace Mohamed Hussein Tantawi, the head of the Egyptian Armed Forces, by el-Sisi, and promoted him to the rank of General.   El-Sisi also took the post of Minister  and Military Production in the Qandil Cabinet."

The Islamists of the Muslim Brotherhood have gone after the Christians, the churches and nuns.  They have torched a Franciscan school, took 3 nuns like they were prisoners of war and paraded them in the streets while they were sexually harassed.  Christians had been all of 10% of Egypt's population before the Muslim Brotherhood came into power with Morsi last year.  The pastor, Boulos Fahmy,  of a Catholic church was interviewed and told the reporter that he was terrified and unable to focus.  His church was just a short distance away from a Franciscan school in Bani Suef.  "I am expecting an attack on my church anytime now," he commented.

When the new President Barack Hussein Obama of the USA went to the Cairo University with his speech in 2009,  the Muslim Brotherhood was still being outlawed, but there they were, listening to him speak.  Khaled Hamza, editor of the Muslim Brotherhood website, confirmed that 10 of their parliamentary bloc had received official invitations to attend the speech.  Conservatives in the US were upset because these Muslims were not known to be the conservatives to appeal to.  However, the comeback was that they had renounced the use of violence in the 70's.  What the Muslim Brotherhood wanted most was to see changes in the US foreign policy.  This seemed to start the future power and comeback of the group, recognition by the American President.