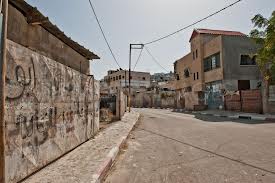 The IDF (Israel Defense Force)  went into Jenin today on a mission jointly with the Israel Border Police to find a wanted terrorist, Bassam Saadi,  and was met with rioting which resulted in them coming under heavy fire shot by the Palestinians from behind cover and from rooftops.

The IDF returned fire and one was killed and 2  were injured who were evacuated by the Red Crescent.

Jenin, in the northern section of ancient Israel, later called Samaria because the city of Samaria had become the capital of Israel.  This also included the land surrounding it.  Today non-Israelis refer to it as the West Bank, the name Jordan gave it.  It  is a Palestinian town today,  It is probably the biblical En Gannim found in Joshua 19:21.  In Roman times it was renamed as Ginaea.  It had a small Jewish community in the 17th century.

In the 1930's it was the center of Arab nationalist fanaticism and became part of Jordan in 1948 till 1967 by Jordan's illegal taking of the land that was part of the Jewish Homeland Agreement through the League of Nations.  The population in 1967 was 8,346 Arabs which was apart from 5,019 Arab refugees in the vicinity.  In 1997 the population had risen to 26,650 of which 50% of that number was of refugees.