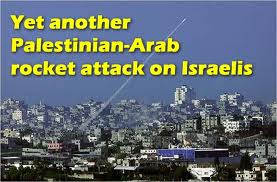 Terrorists in Gaza had concealed a rocket launcher in northern Gaza which shot a rocket into Sha'ar Ha Negev Tuesday evening.  They had shot 2 rockets, but one fell on their own side.

Israel had to have an airstrike Wednesday morning to snuff it out, which they did.  This is supposed to be a period of cease fire, and it hasn't been.  Terrorists continue to shoot rockets and mortars into southern Israel's civilian population.

The responsibility is on Hamas to keep the peace, but they are the ones who shot the rockets!  They fell at the moment that the 26 prisoners were being released.

I'm noticing that as the peace talks progress, the terrorists get less cautious  in their attacks on Israel.


Resource: Christians United For Israel
http://www.jpost.com/Defense/Rockets-fired-from-Gaza-at-South-as-Israel-releases-prisoners-322952
Posted by Nadene Goldfoot at 10:33 AM

Upon hearing about Israel's retaliation to rockets fired into their community, there will be those who will only charge Israel as being in the wrong. It's happened many times that Israel is the only one blamed. As one Israeli reminds: 'Update: Last night, terrorists from Gaza fired rockets into #Israel. In response, the #IDF successfully targeted concealed rocket launchers in the northern Gaza Strip. We will continue to operate in order to safeguard Israel's civilians. "' This is the only way to tell terrorists to stop or there are consequences to their actions.

The world is full of lunatics. Their are those who fire rockets and those who tell us why it is so,,,concerning Israel. In Biblical speak we call them TARES!