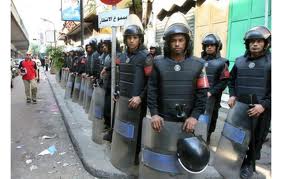 Egypt has not slept.  Al-Qaida was surprised today when their Chief, Ayman al-Zawahri found out his brother was arrested today in Cairo.  Mohammed al-Zawahri b: 1953, a Jehadi Salafist, who are even more extreme than the Muslim Brotherhood, if that is possible, was detained in Gaza which is right across the Nile River from Cairo.  He had spent time in prison from 2000 to 17 March 2011 and then was re-arrested soon after.

173 people were killed yesterday.  The Muslim Brotherhood rebels held up in the downtown Cairo Mosque. People had ignored the 7pm curfew and kept battling.

Protesters find themselves in a crossfire.  The Four Seasons Hotel was the scene of a gunfight right at the doorway  with opposing sides who were wielding guns and machetes.  There are plain old criminals roaming the streets.  One cannot tell who is friend or who is foe, depending on what side you are on.

Two days ago the police had moved thousands of protesters from sit ins supporting Morsi and wound up killing about 200 to do so.  Egypt is the 5th most populous Muslim country  in the Middle East with about 91 million people.  That's not counting the Syrian refugees that took refuge there.  The military-government issued a statement saying that they, the police and the people were together in the face of the treacherous terrorist scheme against Egypt.  They had promised to restore order and security but the Brotherhood isn't letting it happen.  Two policemen have been killed.  One of the Muslim Brotherhood members killed was 30 year old Dr. Khaled el-Banna, the grandson of the Brotherhood's founder, Hassan el-Banna who was shot almost in the same locale in 1949.  This was at Ramses Square where much of the rebellion was going on.

There have been marches where one could see guns in the hands of civilians on both sides.  One Morsi supporter held a machine gun near the hotel.  Other civilians threw rocks or held sticks while police fired.  .

A coalition of Morsi supporters say they will continue demonstrating for this coming week. " The coalition says that they won't back down until it topples the government installed by the military."

Looking back in better days, there was a bus from Cairo to Jerusalem that started in 2008.  They had 3 busses going; one that left at 6am, one at 9:30am and the last at 10:15pm.  A person just bought his ticket a day in advance.  The same was repeated from Jerusalem.  I'm sure that isn't happening today, and of course all tourism is hurt with the rebellion going on.   Maybe someday again all will be quiet and it can again be a great tourist spot.

Posted by Nadene Goldfoot at 9:12 PM