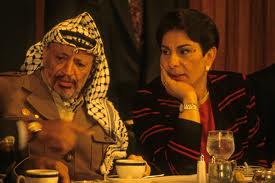 CNN aired this morning an  interview with  a representative of Israel's peace negotiations and then Hanan Ashrawi, 67 year old Palestinian spokeswoman, a  legislator and activist.  She is the daughter of one of the founders of the PLO, Daoud Mikhail.  Anytime she has ever been interviewed she manages to talk like a speeding train spouting out her pat list of grievances and opinions of Israelis. 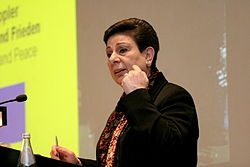 The Israeli’s concerns were of security.  Hanan was asked about the Palestinian concerns and she mentioned “Jerusalem.”  She said, “Jerusalem.”  She didn’t say East Jerusalem.  Then she went on with her diatribe against Israel, which I finally had to turn off.  It was so full of lies and false accusations that I just couldn’t listen anymore.  I feel for our peace negotiators.

A July 26th interview done by Christine Amanpour with Hanan heard her say, “and we are waiting now for the invitation from Secretary Kerry on the basis of what he is going to receive in terms of Israeli commitments.”

Christine answered that statement with, “That sounds suspiciously like laying down conditions and I think everybody pretty much understands that conditions and preconditions are a non-starter.”  Hanan denied saying this.

One of the other comments made by Hanan was, “Well, first of all, when we talk about the Europeans, settlement activities are illegal.  Annexing and stealing land which is not your own is illegal.  The Europeans have been telling the Israelis to stop doing this repeatedly for years.  This is illegal.  This is counter productive.  This destroys the chances of peace.  And Israel has refused".

What she said was a lot of bashing of Israel and then she talked about the right of return of 4 million Palestinians.

What I'd like to do is give her a lesson in Israeli history, something she has so mixed up.