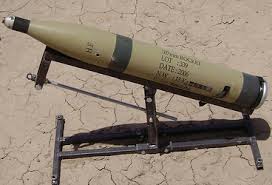 Four Katusha rockets fell into Israel Thursday afternoon fired from southern Lebanon.  This happened in the early hours of Thursday morning to those of us in the USA on the Pacific coast as there is about a 10 hour difference.  Later, The Lebanese branch of the Abdullah Azzaam Brigades, a militant al-Qaida Islamist group said it was them who had attacked Israel.

Israel's Iron Dome downed one, a short-range Katyusha rocket.  A Twitter account, the terrorists' communication media, was seen to say "Praise and thanks be to Allah."  I say thank G-d that one rocket had barely missed. hitting a retirement home near Acre that houses Jewish survivors of the Holocaust.  Thank G-d that that the remaining 3 rockets caused little damage where they did fall.  Thank G-d that the rain of rockets from Gaza have so far fallen without a direct hit on life.  However, they cause enough harm emotionally as it is.  The hatred spewing from Islamic militant groups causes enough of a financial burden on everyone involved that could be better spent improving lives, not trying to take lives, including their own.

This is fairly rare that rockets come in from Lebanon.  Israel has been receiving rocket firing from Gaza even through the cease fire and has responded.  Like Netanyahu warned after this attack, "Anyone who attacks us, or tries to attack us, should know that we will get him."

The response came Friday morning reporting that Israel's planes were successful and hit their target which was south of Beirut.  Israel holds the Lebanese government responsible.  Palestinian military groups are in Lebanon firing at Israel from that point.  As Defense Minister Moshe Ya'aon commented, "The Middle East is hot and turbulent, whether among the extremist Islamic movements or the spread of global jihad."