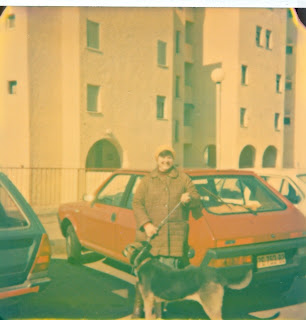 Israel Demonstrations About Housing Needs
Nadene Goldfoot with "Blintz" her German shepherd in Safed, Israel, February 1982.  She lives in the bottom apartment of one of the buildings with bars on the living room window to keep out terrorists.  It came with the apartment.
Israel is having internal problems of having sufficient housing for young adults to buy in Jerusalem.  There are mainly apartment buildings for people to buy  in the major cities in Israel, not family homes that we are used to in the USA.  They have become very expensive in Jerusalem.
The Interior Minister, Eli Yishai, has given his authorization to build 1,600 aparments in Jerusalem and is planning on approving 2,700 more in the coming days.  This will happen in East Jerusalem, the area the Palestinians are planning to take over as their capital.  Their plans have not included talking such things over with Israel and coming to terms of peace.
Israel has exercised de jure sovereignty (by lawful title)  in Jerusalem since 27 June 1967 and have stated that it will remain the undivided and eternal capital of the Jewish state.  In 2010 the Knesset passed legislation giving Jerusalem the highest national status in Israel.  It prioritized construction in all the city and offered grants and tax benefits to residents to make housing, infrastructure, education, employment, business, tourism and other events more affordable.
Analysts are saying that this building will probably hurt Washington in dissuading the PA that are planning to go to the United Nations to declare their statehood in September.  At one time, Israel's building in land obtained due to the 67 War was thought to be the impedus speed up the Palestinians' decision to sit down and come to peace terms with Israel, but it didn't happen.  Instead of allowing the land to go fallow in the past 44 years of indecision on the Arab's part, Israel is making use of it.  Abu Rudaineh is asking the USA and EU to pressure Israel to stop building. Saeb Erekat, Chief PLO negotiator calls the project of building a "war crime".
Israel needs housing badly. Demonstrators creating a rally have been taking over Rothschild Boulevard in Tel Aviv by erecting tents there like a tent city to show their need for housing. They now plan to do it in Be'ersheva. One of the draws in Tel Aviv were free musical performances by many of Israel's top musicians who came and played at the rally.  A run is also being planned as a form of demonstration.
Israel was even mentioned with shock on Fox News as a place outside of the USA where demonstrators were active while in a discussion about why London was rioting and burning.
Jerusalem's Jewish history goes back to King David in 1010 BCE when he defeated the Jebusites and made Jerusalem the administrative capital.  It was captured in 597 BCE when Nebuchadnezzar razed it and deported most all the Jews to Babylon in 586 BCE.  It again came into the Jewish hands but was lost in 70 CE to the Roman attack.  It is the most important site in Israel and has been in the prayers every day to not forget it, and "Next year in Jerusalem" has been said every year since the loss.  Jerusalem is mentioned 600 times in the Tanakh (Old Testement).  One cannot deny that Jerusalem belongs to the Jewish state.  It took an act of G-d to bring it back into Israel's hands once again when Israel was attacked by the surrounding Arabs states in 1967 in what was called "Six Day War" and won despite the odds, something of a huge miracle. Because of the Arab action to eradicate Israel and its population, Jordan lost East Jerusalem.  It is not up for grabs.
http://www.jpost.com/DiplomacyAndPolitics/Article.aspx?id=233471
http://www.keyway.ca/htm2002/jerfacts.htm
arutz Sheva news@israelnationalnews.com   Israel to approve 4,300 Units in Jerusalem by Gavriel Queenan and Cost of Living Protests Reach IDF by David Lev
http://www.jewishvirtuallibrary.org/jsource/vie/Jerusalem1.html
http://www.haaretz.com/blogs/the-arms-race/israelis-run-through-tel-aviv-for-social-justice-1.378031
Posted by Nadene Goldfoot at 10:10 AM