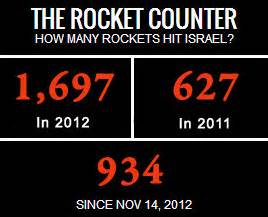 Three rockets hit southern Israel near the Hof Ashkelon regional council area Wednesday morning, setting off the alarm system in Ashkelon and probably shocking everyone.  That broke the calm of 2 months.  So far this year, 20 rockets have been fired into Israel from Gaza.  There was an attack when Obama was visiting.

Since November 2012's Israeli Operation Pillar of Defense,  things had been a little better.  Israel had been hit ever since 2001 by Gaza.  Eleven years of living under such attacks was too much.  No government except the attacked Israel was complaining about it.  The  UN did nothing about it.  Neither did all the Human Rights Nations.  Only when Israel responded with Pillar of Defense did we hear any comments, and that was to complain about Israel's retaliation of sorts.  Even that was different from the Palestinian attacks.  Whereas the Palestinians aimed at the populace hoping to hit civilians, Israel went in by air and pinpointed targets with the goal of stopping their ability to continue firing at Israel.  They went out of their way not to hit civilians.  Of course, their militants hide behind women and children in schools and mosques when the going gets rough.

An example of this lopsided attitude which condemns Israel so easily is found in today's news about soccer.

"A call by 62 top football players, many from English Premier League and first division teams in Europe, condemned Israel’s recent attack on Gaza and the decision by UEFA, the European football federation, to hold its 2013 Under 21 tournament in Israel.  Petitions calling for the boycott of the tournament have been organised by, among others, the Palestine Solidarity Campaign, the Muslim Public Affairs Committee UK, and former Tottenham Hotspur footballer Frédéric Kanouté "  Kanoute ended his international career in 2010.  The 35 year old 6'4" striker now plays in the Chinese League.

Where was this group when Israel was being attacked for 11 years?  Now the attack is starting up again.  But the soccer game will be held in Israel on time as scheduled.  Notice that it is the Palestine group leading the boycott.
The result of this morning's attack was the immediate closure of the Kerem Shalom border crossing.

It looks like the Salafist group are the ones doing the shooting.  They have stated that they will not abide by the rules.