Differences in Ideology Keep Arabs Away From Peace Negotiations 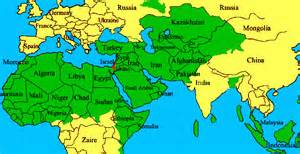 Map of Islamic World with Israel in Red.
See if you can find Israel.
On May 14, 1948, Israel became a state among the nations.  The Arabs of the area were also offered a state of their own and have resisted acceptance of such, though they cry out that they want their own state as well.  The problem is that the state they want is part of the small acreage that makes up Israel.

Here's a difference in ideology.  Israel's population is made up of 6 million Jews and 1.7 million Arabs and others.  It was created as the one Jewish state in the world on 8,000 sq miles and is to be the haven for Jews who have suffered from anti-Semitism for 2,000 years or more, depending on what attack we are starting from.  There are only 14 million Jews left in the world.  We make up only 0.02% of the world population.

There are already 48 Muslim majority states, possibly even more so depending on the material one is using.  Wikipedia as of 2011 said this.    Islam is the 2nd largest religious group in the world.  There are 1.62 billion Muslims in the world making up 23% of the world population.  They already claim 5,120,000 sq. miles of land.

There is no comparison here.  One is on the verge of extinction and the other's numbers are bulging, both in land and in population.

The Arab Palestinians will not come to terms with the Israelis.  They are bickering over the issue of established Jewish villages, town and cities they refer to as "settlements,"  a very poor choice of a noun describing this population.  That's because they lie in the A or B section of Judea-Samaria, the Jewish land the Jordans have labeled as the West Bank that they want for their state.  This is because of the 1967 War when Arabs attacked the Jews of Israel and the Jews won, which meant that they inherited legally land which was originally to be theirs in the first place by the law of 1920 through the League of Nations.  It's funny how this worked out.  The Arab greed for Israel meant that they lost what they had to Israel. I'd swear that Ha-Shem (G-d) stepped in and ran  interferrence for Israel.

At the same time, the Arabs keep on announcing that their state is to be all 100% Muslim and there are to be no Jews allowed.  Thus there is the matter of boundaries, and allowing the Jews in section C to be a part of Israel rather than to be displaced.

The Arabs are not bending over backwards in displaying any neighborly tendancies.  Instead, their texbooks for schools do not show Israel on their maps in Geography lessons.  Instead, Palestine is written as the name.  Is this a Freudian slip?  No, this is their true intention.  Their pre-schoolers are taught to admire suicide bombers.  These are their heroes instead of Superman.  What a philosophy this is!

Moshe Ya'alon is the Israeli Defense Minister.  He spoke on Monday  to the Knesset Foreign Affairs and Defense Committee, a group made up not only of Jews but Arabs as well who are in the Knesset.  His topic was "Prospects for Peace with Palestinians."  He told them that we are ready to begin immediately without preconditions and discuss all the issues.  Israel's aim is not to rule the Palestinians.  Israel wants to advance the diplomatic process but Abbas is avoiding this by setting preconditions.  Israel is not about to pay any more futile prices just to get them to come to the table.