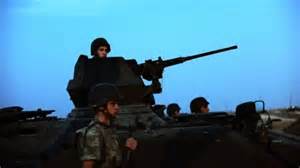 First it was Wednesday mornings hit from Gaza by 3 rockets.  Now at 12:30am Wednesday evening a mortar shell flew into the Golan Heights by the Syrian army.

It appears they are trying to provoke Israel into making an attack as their government because they also had fired at an Israeli jeep by deliberately aiming at it.  This was no stray hit.  There was nothing else to hit aiming in that direction.

UN Ambassador Ron Proser wrote a letter of complaint to the UN Security Council about it, but most likely nothing will happen.  They never seem to act on messages from Israel; only about Israel.