Palestinians in Judea and Samaria Act Out 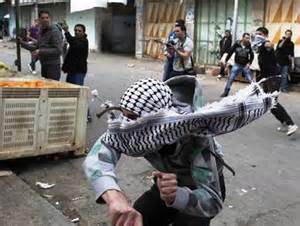 We're always hearing about the rockets, mortars and missiles coming from Gaza and hitting southern Israel.  Judea and Samaria are acting out as well in different ways.

From June 11th to the 17th , 2013, there have been 72 rock throwing incidents of Arabs throwing rocks at Jews, and 15 firebomb attacks.  Before this there was a stabbing incident where Eviatar Borovzky was stabbed to death by a Palestinian.
"The name Judea, when used in Judea and Samaria, refers to all of the region south of Jerusalem including Gush Etzion and Har Hebron. The region of Samaria, on the other hand, refers to the area north of Jerusalem. East Jerusalem has been incorporated into Jerusalem District and is under Israeli civilian rule. Jerusalem is undivided today.  That part of the West Bank is thus excluded from the administrative structure that is the Judea and Samaria Area."

Judea and Samaria are acting like a buffer zone between 4 million Jews of the Tel Aviv and Netanya corridor.  This original Israelite land is the Iron Dome for the 6 million Jews of today's Israel.  There is nothing else protecting them from the land of Jordan, Iraq, Saudi Arabia,  Syria, and Lebanon and the ultimate Iranian  incursion.