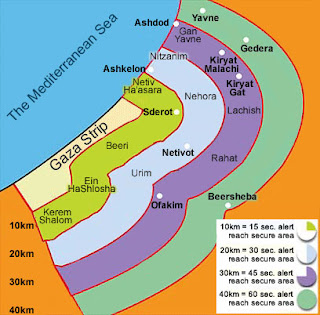 Right in the midst of celebrating Lag Ba'Omer outside with picnics and general fun, the Hamas terrorists from Gaza had to fire their 4th rocket  in the past 9 days  into southern Israel on Saturday (Sunday in Israel).  First they had fired 2 rockets on Thursday the 18th, then 1 on Saturday the 21st and now this one on the 27th.

Not only did thousands of families have to pick up their picnic baskets and games for the children to get home to seek shelter, but they left quite miffed, anxious for the government to keep their promise and not let terrorism get out of control.

This year alone Israel has had 22 bombings into southern Israel. Israel had to take a stand in November 2012, and December was a time of cease fire.   January was a month without any strikes.
February had one strike in Ashkelon, Portland, Oregon and Baltimore, Maryland's sister city.  March came in wildly with 4 strikes in one attack directed at Sderot, a city very close to the border.  On April 2nd there were 2 strikes of mortar shells.  April 3rd was a day when 2 hit Sderot again.  April 4th started off with 1 rocket and 3 mortar shell attacks.  April 7th, Holocaust Day, felt 3 rocket attacks.  On April 17th, Eilat and Aqaba were hit with 2 Grad rockets.  On April 18th there were 2 rocket attacks and on the 21st, 1 rocket attack and then yesterday's rocket attack on the joyous holiday of Lag Ba'Omer.

The IDF had enough as well.  Their planes hit a terrorist stronghold and armory with weapons in southern Gaza.  Enough said.  Hamas had been warned months ago.  Israel is not about to put up with their citizens' lives being  threatened.  They also closed one of the crossings, the Kerem Shalom Crossing with Gaza as a result of this shelling into Israel.

Notice that Israel does not just fly over Gaza and bomb.  They only do it in defense of an already administered attack on their people and their land. It is a last resort action to thwart this war-like action.   Israel is not a country that wants to take other's land or hurt people.  They are not about to stand silently when others do just this to their people, though.

These rockets firings into Israel have been going on since 2001. This caused Israel to withdraw all its citizens that were living in Gaza in August 2005.  Then the shelling increased with the result of 4,800 rockets, missiles and mortars hitting southern Israel.  Israelis pick up the rocket pieces and have turned them into sculptures of peaceful objects such as candlestick holders.   Hamas terrorists and others following them are people who do not learn from their past mistakes like most people do. They have been doing it to kill innocent people as well as to cause psychological trauma and disrupt the daily life of Israelis.   They're only making Israel stronger in their resolve that Palestinians are no people to welcome as a neighboring state.

Israel did not take another's land.  This land of Israel was originally Israel's in the first place, but Jews had to go through the legal steps of gaining it back to their name. They did it by consultations, meetings, decisions, agreements and finally as legally as can be by buying  land from landowners.  Then the final say-so was through the League of Nations and years later, through the United Nations on May 14, 1948.  Let no man say we ever stole their land.  This whole attack has been from one principal power telling their people, the Palestinians, a completely false history of events that led to Israel.  It's time they woke up to truth.