JAFFA: Fought Over By Egyptians and Canaanites and Origin of the Israelites? 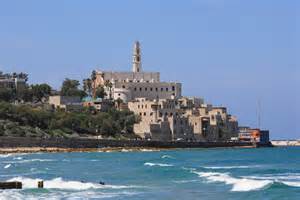 Jaffa, originated about 1800 BCE,  is a port city in Israel on the Mediterranean that is 60 km ( 37 miles) NW of Jerusalem. Today it is joined with Tel Aviv.   In excavations in 2008 by the Jaffa Cultural Heritage Project many items had been found that told more about its history. Biblical texts were used as the primary historical referent.  It had converted from a Canaanite town to an Egyptian stronghold.

Canaanites are said to be the descendants of Canaan, son of Ham who was one of Noah's 3 sons and occupied land between the Nile and Euphrates Rivers.  The people of Syria also called themselves Canaanites.  They seem to have been a mixture of Horites, Hittites and Hebrews from the Hyksos period of the 17th century BCE.  By the 13th century they were almost entirely obliterated or assimilated by the Israelites, Philistines on the coast in the 12th century and the Arameans in the north in the 11th century.  The remainder were ruled by Kings David and Solomon  of Israel and absorbed into the community.

This was found by new archaeological data with the well-known historical texts.  The Egyptians even built on top of the city's earlier remains.  It tells a story of violence and peaceful social interactions over a period of more than 300 years, from 1460 to 1130 BCE.  This includes intermarriage of peoples.

Jaffa was mentioned in Egyptian documents from the time of the 19th Egyptian dynasty (16th century BCE) and also in Assyrian documents.  It's a natural place for anchorage as it has a slight promontory jutting out from the straight coastline.

The Hyksos, foreign rulers in Egypt who were Semitic Asiatics, were expulsed from Egypt in the mid-16th century BCE.  Our biblical history of Joseph going into Egypt and becoming an assistant to the Pharaoh could have been one of them, as well as his family and the rest of the Israelites.  It is said that they overran Egypt after the destruction of the Middle Kingdom.  That's when the prevailing pharaoh decided to make Joseph's family slaves for this very reason.  They were too plentiful and might take over.  Excavations in Egypt have revealed royal Hyksos scarabs bearing names similar to Hebrew.  Hyksos remains have also been uncovered in Israel.  They ruled in Egypt from 1720-1580 BCE.  According to other sources, the time the Children of Israel entered the country was at this same time.  Hyksos is said to be an Egyptian name meaning "rulers of the foreign lands."

After that, the pharaohs of the early 18th dynasty held regular military campaigns against the communities in Canaan.  They succeeded in limiting more Asiatic incursions into Egypt so that the Egyptian New Kingdom could expand.  The Canaanite rulers had to ask for support from their allies to the north to stop Egypt.  This led to the famous Battle of Megiddo in 1456 BCE  where pharaoh Thutmose III fell upon the Asiatic coalition which was led by the king of Kadesh on the Orontes.  Jaffa was one of the towns that was subjugated.  Their troops were in the defeated coalition.

Rameses II ruled from 1262 to 1196 BCE.  It's thought he may have been the Pharaoh in Moses's history.  It's also the name of an ancient Eygptian city on the Nile Delta where Jacob and his family settled (Gen.47:11,27).  Their descendants were forced to build storehouses for the Egyptian pharaoh.  It was also the site where the Israelites left from to start their exodus (Exod. 12:37)

Moses led the Israelites into Canaan when he was 80 years old and they traveled for 40 years to get there.  He lived from what is accepted as 1391 to 1271 BCE.  In Biblical times Jaffa marked the boundary of the Philistines even though it did lay within the rightful area for the tribe of Judah.  When King Solomon reigned (961-920 BCE)  and even after the Jews returned to their home after their Babylonian captivity, the cedars of Lebanon were floated to the sea of Jaffa on their way to Jerusalem for the Temple.  Johah of Jonah and the whale sailed from Jaffa.

In the Persian period, Jaffa belonged to the Phoenicians.  During the Hellenistic period it was an independent city.  Judah the Maccabee avenged the massacre of the Jewish community there.  His brothers, Jonathan and Simon, took Jaffa back and replaced the foreign population with Jews.  Then it served as the principal Jewish port until the destruction of Jerusalem in 70 CE.

In the 19th century CE, Jewish colonies surrounded the city.  During WWI the Turks of the Ottoman Empire expelled Jews from Jaffa and Tel Aviv.  By 1921-1922 there were Arab riots that forced the Jews to go to Tel Aviv that was founded as a suburb of Jaffa.    Haifa's harbor was developed which undermined the economic position of Jaffa, but it did continue with its share of orange exports.  By 1946 the population was 101,000 of which 30% were Jews.   During the War of Independence the Arab sections of Jaffa capitulated on May 14, 1948 and almost all the Arabs left town.  New immigrants moved there.  Then Jaffa and Tel Aviv became one city (Tel-Aviv-Jaffa).  Its port was closed in 1965.  An artist's colony has been created out of a quarter, just like in Safed.

Today Jaffa is fighting a lot of Arab-Jewish hostility with Arab hip-hoppers and their complaints about Jews, but life is going on with a population of 55,000; 35,000 Jewish and 20,000 Muslims or Christians.  . The 2 cultures have an Arab-Hebrew Theater Group and an Arab-Hebrew Community Center.  Jaffa ihas become  tourist destination because of its beautifully restored old quarter filled with galleries, shops and restaurants.   One of the few religious sites is the house of Simon the Tanner, where, according to the New Testament, Peter first realized the gospel message had to be extended beyond Judaism. You can walk for about 40 minutes to Tel Aviv.  As cultures had to blend in the ancient days between Egyptians and Canaanites, so it is happening in Jaffa between the Muslims and the Jews.  Since it took them 300 years to co-exist, perhaps we should also figure that it might take that long for the Muslims to accept Israel in their midst.

Resource: http://www.jidaily.com/11d51?utm_source=Jewish+Ideas+Daily+Insider&utm_campaign=defb6a369a-Insider&utm_medium=email
The New Standard Jewish Encyclopedia
http://www.jewishvirtuallibrary.org/jsource/vie/Telaviv.html
https://www.facebook.com/AJCCJaffa
http://www.arab-hebrew-theatre.org.il/eng/index.asp
http://www.youtube.com/watch?v=cM1wDeaY6yU  Be sure to watch this.  It's the best community center I've ever seen!
Posted by Nadene Goldfoot at 11:57 AM