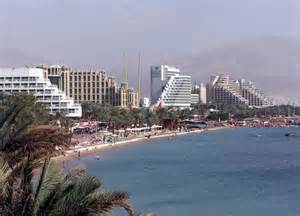 Eilat was hit by 2 grad rockets this morning by a Salafi Muslim jihadist group with probable ties to al-Qaeda, "The lions of the Mujahedeen Shura Council in the Environs of Jerusalem."  .   One landed in an open area while the other exploded in a back yard.    This is a resort town on the Red Sea that vacationing Scandinavians love.  In the past rockets are usually from the Sinai Peninsula.  This area has become a center for terrorists since Mubarak took over in the fall of 2011.

People suffered shock and anxiety but no one was injured.  The airport was closed as a precaution.  Schools remained open.

Aqaba, Jordan is across the bay from Eilat. could have also been hit but information isn't forthcoming to Israel.  Last year Eilat was hit several time by the group, Ansar Jerusalem.

The Red Sea forms Israel's southern outlet to the Indian Ocean by way of Eilat.  The sea itself is a branch of the Indian Ocean that goes from the Strait of Aden to Suez and Eilat.  It had been thought of as the "Reed Sea" that the Israelites crossed during the Exodus from Egypt.  It's long and narrow, giving one a sandy beach with protected water that's warm and lovely to visit in the middle of winter.  It has a coral reef and night life, making it very attractive with a dry desert climate as it's on the southern Negev desert.  46,600 people live here.

Yesterday a terrorist or more likely terrorists set off 2 bombs in the Boston Marathon which killed 3 and injured close to 150 people, some extremely serious with lost limbs.  This has set off a series of threats of all kinds all over the USA, and here in Israel, a grad rocket attack.  Since Hamas terrorists in Gaza are the ruling political party, they are responsible for this attack. The Salafi party in Egypt is even more unreasonable that the Muslim Brotherhood, so must be out to show their strength.