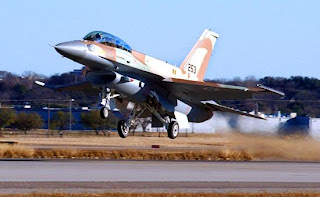 IAF F16 knocks out possible Hizboula drone. They're there for Israelis 24/7.
Nadene Goldfoot
Israel was able to shoot down a drone on Thursday as it came in from the north, Lebanon, which is on the northern border of Israel.

It is thought that the Hezbollah militant groups was behind this attempt to infiltrate.  Of course Hezbollah denies this.  Hezbollah is a Shiite militant group trying to take advantage of the civil war going on in neighboring Syria.

A spokesman from Israel's  IDF  said that an F-16 warplane shot down the drone.  The drone was smashed into the sea about 5 miles from Haifa, Israel's northern port.  Israeli naval forces have been searching for the wreckage.

Lebanon has been made up of a mixed population of which 60% had been Muslims of Sunnis and Shi'a following Hanafi and Jafari fiqhs.  Christians had been the ruling party even though they were a minority until the end of the 20th century, but not today.  It is a small country with only about 4,196,453 population in all.

Major Hadad of Lebanon was a good friend of Israel.  His troops used to patrol the border between Lebanon and Syria in order to prevent terrorism.  He would come into our army hospital in Haifa for his R and R.  His men attacked a PLO group of terrorists in 1982 in retribution and got themselves and Israel in trouble for it, as our general had allowed them to enter the area.  Now the terrorism out of Lebanon isn't even necessarily Lebanese home grown but a neighboring faction and comes from the sky as well. Syria is under the umbrella of Shiite Iran who hates Israel.   Thank goodness for F-16's for defense.