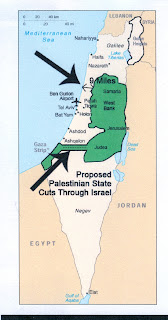 Two rockets were aimed at Ashkelon by Hamas terrorists with one falling in an open area. It's only 8.1 miles from the Gaza border!   The other was stopped by the new Iron Dome missile defense system.  This happened as a truce was being talked about. The Izz al-Din al-Qassam Brigades told Egyptian officials who are trying to bring about a ceasefire that they were ready, but evidently didn't keep to their word.  They are Hamas terrorists.  Israel is very tiny and this brings it to mind just how tiny it is!

Ashkelon is the sister-city of Portland, Oregon and Baltimore, Maryland.  It is home of the Barzilai Medical Center that serves both Israel and Gaza patients.  Usually it has been Sderot, a town less than a mile from the Gaza border that is hit constantly.  The rockets fired off today are reaching out further and further.

The history of Ashkelon goes back 5,000 years as an ancient port and is one of the oldest cities in the world..  It was mentioned in Egyptian writings back in the 19th Century BCE.  by the end of the 13th Century BCE it was conquered by the Philistines who arrived from the islands.   It was to go to the tribe of Dan, one of the 12 tribes, sons of Jacob.   The problem was that the Israelites couldn't conquer it from the Philistines.  Samson fought and caused them lots of damage in endless fighting, but was unable to overcome them.  King Saul in the 11th century BCE , first king of Israel, son of Kish and from the tribe of Benjamin  and his son  Jonathan fought the Philistines and destroyed their garrison in Geva, but were beaten in the valley.  Saul and his sons died on Mt. Gilboa.  After this David lamented, "Tell it not in Gath, publish it not in the streets of Ashkelon, lest the daughters of the Philistines rejoice." ( Samuel, 11:1, XX1.)


Jews lived here as a community in mishnaic and talmudic times of 220 CE and 500 CE, but it was considered outside the boundaries of Palestine.  The Jewish community survived its capture by the Crusaders in 1153.   It is important to note here that the Philistines have long died out as a country as well as the Canaanites and the Amorites, but that the Jews remain as an entity.

The modern time starts with the liberation of Majdal, an Egyptian army base in 1948 by Israelis.  On November 5, 1948 the Israelis were on their way to lift the Egyptian siege of the Negev and they conquered Majdal.  It incorporates the former Arab town of Migdal and the Afridar section development by the South African Zionist Federation.

The Negev was the part given to the Jews in the dividing of half the land  which was promised by the English with the mandate  in the Balfour Declaration. It makes up 55% of the Jewish Homeland of 1948 and is a rocky desert.  The northern Negev was originally allotted to the tribe of Judah and the southern Negev to the tribe Shimon. It was a part of the kingdom of Judah.

Today over 116,000 people live in Ashkelon.  It's on the Mediterranean Coast 56 km or about 35 miles south of Tel Aviv  in an agricultural region connected to Israel by modern roads and trains that run the length of the country.

Like Portland, Oregon, it is a green, well-tended residential city with many gardens and woods with plentiful views, sites, but with lots of ancient splendor.  It's on the Sea Road which runs along the coast from Egypt to Syria.

As to the Gaza border, Ashkelon is the same distance as Beaverton, Oregon is to Portland.  The rockets don't have to travel very far to hit Ashkelon.   It is only 13 km or 8.1 miles north of the Gaza border.  Be sure to click on the map to enlarge and see Ashkelon just above the proposed bridge from Gaza to Judea-Samaria.