Israeli Leadership Leading up to and During Six Day War 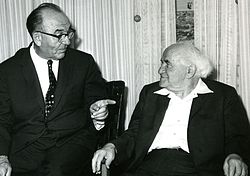 Levi Eshkol of Mapai was Israel's 3rd Prime Minister and was serving during the Six Day War that is so important in our history.  He served from December 22, 1964, came came into the position when David Ben Gurion resigned.  He remained until February 26, 1969 when he died of a heart attack in Jerusalem.
Levi immigrated to Palestine in 1914 and remained, and worked in farming.  He became a founder in the Labor Party that has been to the left of politics.  He was also a founder of Histadrut and Haganah.

A deceptive calm had been going on for the past 10 years.
The UN Emergency Force remained in its position between Egypt and Israel.
The Frontier with Egypt was so quiet.  Other spots had problems occasionally.
It was an illusory calm.
The Arabs had not lost their hostility and hatred for Israel.
Egypt was the chief instigator and were showing it in their speeches. 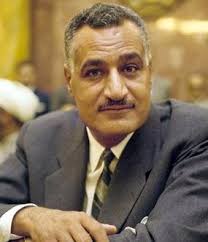 Gamal Abdul Nasser b: 1918-d: 1970
2nd President of Egypt
He was  head of the Arab coalition against Israel which decreed the closing of the Straits of Tiran to Israel shipping.  During the Six Day War he started, he
lost his air force and much of his army and well as the entire Sinai peninsua, he was rapidly defeated.  Russians supported him and he rearmed his forces rapidly.

"WE BELIEVE THAT THE EVIL WHICH WAS PLACED IN THE HEART OF THE ARAB WORLD SHOULD BE ERADICATED."Letter to King Hussein, from Naser, March 13, 1961

"THE ARAB NATIONAL AIM IS THE ELIMINATION OF ISRAEL."Nasser's published statement with President Aref of Iraq on May 25, 1965.

During his period Eshkol annulled military rule over Arabs.  President Lyndon Baines Johnson invited him to the White House, a first for Israel and the USA.


"The special relationship he developed with President Lyndon Johnson would prove pivotal in securing US political and military support for Israel during the "Waiting period" preceding the Six-Day War of June 5, 1967.
The waiting period (Hebrew: תקופת ההמתנה‎,Tkufat HaHamtana) was a 3-week interval in the history of Israel, May 15 – June 5, 1967, between the Egyptian crossing of the Suez Canal into the Sinai Peninsula and the outbreak of the Six-Day War.
According to Michael Oren, Eshkol's intransigence (refusal to change his mind) in the face of military pressure to launch an Israeli attack is considered to have been instrumental in increasing Israel's strategic advantage as well as obtaining international legitimacy, yet at the time he was perceived as hesitant, an image cemented following a stuttered radio speech on 28 May.
The Egyptian President Nasser's ever more overt provocations, created diplomatic support for Israel. Eshkol eventually established a National Unity Government together with Menachem Begin's Herut party, conceding the Defense portfolio to Moshe Dayan."
Yes, Israel waited for 3 weeks, from May 15 for international action of UN to stop the escalation and remove the threat that had amassed in its borders.  The was Syria, Egypt and the Soviet Union who had spread false reports of concentrations of Israeli forces on the Syrian frontier.  They ignored the on the spot reports by the UN that no such concentrations existed.
These false reports were used by Egypt as a pretext for concentrating the bulk of its army in Sinai;  90,000 men and 900 tanks.
Egypt then demanded that the UN Emergency Force withdraw and stop serving as a barrier between Egypt and Israel.  The UN left the scene.
Egypt closed the Straits of Tiran to all navigation to Israel and called for war.
Egypt led the Arab States in forming a war pact against Israel. The armies of Jordan, Iraq and Syria began to concentrate their forces along the frontiers with Israel.  The Jordanian Army was put under the command of an Egyptian officer.
Arab leaders said publicly their intention was to destroy Israel.
"THE ARAB PEOPLE WANTS TO FIGHT.   WE HAVE BEEN WAITING FOR THE RIGHT DAY WHEN WE WOULD BE FULLY PREPARED...RECENTLY, WE HAVE FELT STRONG ENOUGH TO TRIUMPH  WITH GOD'S HELP, IF WE ENTER INTO BATTLE WITH ISRAEL.  ON THAT BASIS, WE HAVE DECIDED TO TAKE THE ACTUAL MEASURES.  TAKING THIS STEP MAKES IT IMPERATIVE THAT WE BE READY TO EMBARK ON A TOTAL WAR WITH ISRAEL. " Nasser speech, May 26, 1967.
The miracle happened.  Israel destroyed the armies that had massed along its frontiers and menaced its vital centers.  Cease-fire lines were established along the Suez Canal, the Jordan River and the Golan Heights.  The Straits of Tiran were once again open to navigation.  Jerusalem was then re-united as it had been a divided city.  This enabled Jews for the first time to enter Jerusalem and pray at the Kotel (Wall).  Israelis had been kept out ever since 1948-19 years!
Unfortunately, it was that after trying to eradicate Israel since
1947-49, and 1956, and the 1967 and losing all three major wars, the Arabs did not take this well.  They met in Khartoum, Africa and came up with their 3 no's saying that they would never ever make peace with Israel.
.
Resource:
facts about Israel published 1973, by Ministery for foreign affairs, Jerusalem
https://en.wikipedia.org/wiki/List_of_presidents_of_Israel
https://en.wikipedia.org/wiki/Zalman_Shazar
https://en.wikipedia.org/wiki/List_of_prime_ministers_of_Israel
https://en.wikipedia.org/wiki/Levi_Eshkol
https://en.wikipedia.org/wiki/Waiting_period_(Six-Day_War)
https://www.britannica.com/biography/Moshe-Dayan
Posted by Nadene Goldfoot at 11:57 AM