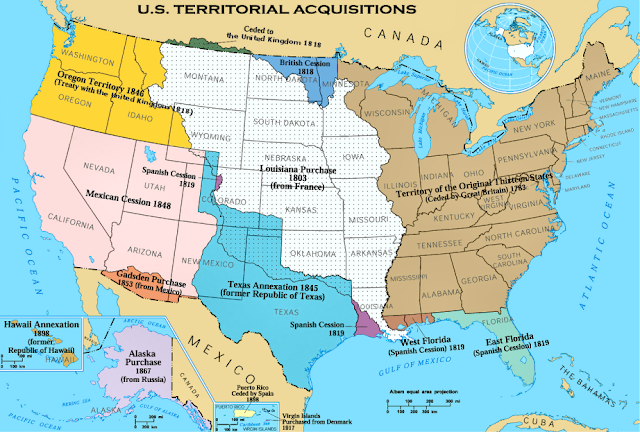 The USA has used annexation many times for good reasons.  Texas is as good an example as any.  Texas was annexed by the United States in 1845 and became the 28th state. Until 1836, Texas had been part of Mexico, but in that year a group of settlers from the United States who lived in Mexican Texas declared independence. ...

The annexation of Texas contributed to the coming of the Mexican-American War (1846-1848).  And who had been the ruler in Mexico at one time?  Wasn't he a Frenchman?  Good Grief!

Yes, later In 1862, French Emperor Napoleon III maneuvered to establish a French client state in Mexico, and eventually installed Maximilian of Habsburg, Archduke of Austria, as Emperor of Mexico.

In the United States, all local governments are considered "creatures of the state" according to Dillon's Rule, which resulted from the work of John Forrest Dillon on the law of municipal corporations. Dillon's Rule implies, among other things, that the boundaries of any jurisdiction falling under state government can be modified by state government action.

For this reason, examples of municipal annexation are distinct from annexations involving sovereign states.

Under the Hague Conventions of 1899 and 1907, United States territory can include areas occupied by and controlled by the United States Armed Forces. When de facto military control is maintained and exercised, occupation (and thus possession) extends to that territory. Military personnel in control of the territory have a responsibility to provide for the basic needs of individuals under their control (which includes food, clothing, shelter, medical attention, law maintenance, and social order). To prevent systematic abuse of puppet governments by the occupation forces, they must enforce laws that were in place in the territory prior to the occupation.

Europe went through many wars.  My grandmother's home town in Lithuania was Lazdijai, sitting on the border with Poland.  After her birth in 1884, it was taken over by Poland.  Was that an annexation or just a take-over? Jews were promised a Jewish Homeland by the League of Nations and the United Nations, yet they witnessed the loss of 80% of their promised land being given to a Saudi Prince Abdullah who was a prince without a country to rule, and could be an excellent trader with England.  Israel was left with 20% and then witnessed Judea, Samaria and East Jerusalem being given to the Palestinian Arabs at the last minute.  The Jewish Homeland was cut apart again in the oddest of shapes ever!  Some cities only a few miles from Jerusalem are not in the right zone to be a part of the 8,000 sq miles Jews were left with.  It's a crazy situation but the state has just celebrated their 73rd birthday.

Yet is this move to annex so very different from Israel's position?  Judea and Samaria were divided into sectors A, B, and C with Israel law over B and C, and A was left for the Arabs.  Arabs have been creeping into the large area C and building illegally.  Evidently A has been left which may become the Arab Palestine-an area they claim will be devoid of all Jews.  This position has rule of B and C to come from the IDF, not a municipal force.  That's one of the problems.

The process of annexation need not be subversive.  Israel probably should have annexed territory that had been part of their ancient history going back 3,000 years and more, when they had the right to do so at the end of the Six Day War when they were attacked by many countries and came out of it as the winner, surprising all!  (A problem existing is that the UN, with influence like Jack Falk, refuse to accept Israel's existence in the first place, so never accept an annexation by Israel such as the Golan Heights, as much needed for defense and which benefited the population very much.)

Now they have the green light to go ahead with the USA government in agreement of such a move.  Israel has annexed earlier such places as the  without much ado.  Today, after 53 years, those with jealous hearts  are up in arms about it like the UN, EU, etc.

Those living in these places would rather be Israeli citizens.  Will Israel take the step?  Netanyahu has been promising that he would.  If he does, he will show himself to be a very brave person to buck all the negativity floating around.
He's got himself in a quandary being he is sitting as one of two Prime Ministers these days, so it isn't dependent on him alone but the whole Knesset situation.
In 1980–81 Israel annexed East Jerusalem and the Golan Heights.

As a geopolitical region, the Golan Heights is the area captured from Syria and occupied by Israel during the 1967 Six-Day War, territory which has been administered as part of Israel since 1981. This region includes the western two-thirds of the geological Golan Heights and the Israeli-occupied part of Mount Hermon.

Arabs in the Golan had been constantly shelling Israel from above, and the attack in 1967 by the Arab nations turned out that Israel won, and in doing so Israel actually gained territory back that had been given away by the British in their 80% of the Jewish Homeland package to Abdullah.

Neither Israel's annexation nor Palestine's claim over East Jerusalem has been internationally recognized. This is no surprise as the UN has been attacking only Israel unjustly and ignoring all other matters and countries, no matter what they have been doing.  (I don't mean to sound like a rotten kid, but this has actually been the situation.  Just read what the USA Ambassador to the UN, Nikki Haley, has witnessed.)


Jerusalem is now a unified city, no longer divided.

The Jerusalem City Council was established in 1863 during the rule of the Ottoman Empire. From 1948 to 1967 two municipalities operated in the city: an Israeli municipality provided services to the western neighborhoods of the city and a Jordanian municipality to its eastern parts.
By 1840, the Jewish community constituted the largest single religious group in the city. From the 1880s onward, the Jews constituted the majority within the city. However, it was only in 1937, under the British Mandate, that the first Jewish mayor was appointed. Since 1948 every mayor has been Jewish.
Moshe Lion has been the present mayor since 2018.

While the Israeli public at large, and especially the law's critics, viewed it as an annexation, the law avoids the use of the word. Prime Minister Menachem Begin responded to Amnon Rubinstein's criticism by saying, "You use the word 'annexation.' I do not use it," and noting that similar wording was used in a 1967 law authorizing the government to apply Israeli law to any part of the Land of Israel.

The eu is on the wrong side of the issue again--still.
the land belongs to the israeli's period. and the best thing for the palestinians is to let israel have it and tend it and care for it as they have never done anyway and benefit by israel's right claim and right use of that land.
Shame shame again on the eu for standing directly in the way of real peace-real solutions!
Andre'