Palestinians Farthest Away From Peaceful Coexistence 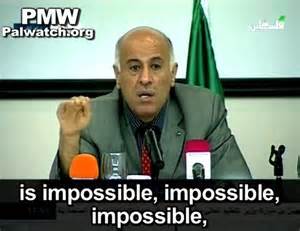 If someone is going to move into the house next door to you, you hope they will be nice neighbors; mow their lawn, pick up toys, say Hi to you.  The same goes with Israel's potential new neighbor, a Palestine.  I find they are the worst possible candidates right now.  Can't the real-estate people find more suitable candidates?

Jibril Rajoub, deputy secretary general of Fatah's Central Committee, head of the Palestinian Olympic committee and former director of the Preventive security Force in the "West Bank" (Judea and Samaria), said just recently on May 1st that for Fatah, resistance to Israel in all forms remains on our agenda.  They like it because it is effective and costly for Israel.  He means violence against Israel.  Popular resistance refers to protests that flare up since the 2nd intifada.

This man was in jail in Israel for 17 years for throwing a hand-grenade at an army bus.  He was part of Arafat's team and was the national security adviser.  He's also serving on a committee for a 2 state solution and starred in an advertising campaign advocating settlement to the conflict.  He calls out that he's Israel's partner.  Evidently he says on the ad that there is consensus in the Arab world to recognize the existence of Israel in return for an end to occupation.  Well, duh!  But he's two-faced.

Rajoub was interviewed again last week and let it be known that he calls on Arabs to take part in "the liberation of Jerusalem."  In other words, they intend to make Jerusalem part of Palestine.   He didn't even mention "East' Jerusalem.  It was "Jerusalem."   He's angry with other Arab states for not giving enough money to financially aid the PA.  He wants Arabs to help liberate Jerusalem with money and whatever else it takes, like mobilization.  He wants swords drawn in the face of the Zionist enemy and that would be great, he said.

Palestinian Media Watch quoted him saying that if they had nuclear weapons, "we'd use them" against Israel immediately. "   Then he bemoans and groans with "Believe me, our sick are dying in the hospitals...and the only countries with money to come through with Arab League decisions are Saudi Arabia, Kuwait and Algeria."   Sick or injured have been taken to Ashkelon's hospital in Israel.  They're well treated there. Usually it's because their leaders station their rocket launchers among the population.  Israel pulled out of Gaza for peace, but got a big surprise.  It's the launching pad for Palestinians to hit Israelis.  Do they ever plot and scheme to get even closer and take over!.  It's pretty obvious listening to Rajoub.

Palestinians haven't agreed on anything between themselves and aren't self sufficient. Fatah was called the moderate.  This is moderate?  Well, Hamas continues to rain down mortars, missiles and rockets on southern Israel and now Fatah will nuke us.  Their leaders have created a population not capable of doing anything but hate.   They depend on handouts.  They are still dreaming of killing off Israelis.  No indeed.  I wouldn't want them as neighbors.

Then we have google who jumped the gun and has them  listed as a full blown state which hasn't happened yet and may never at this rate of hypocrisy.

Jerusalem is not mentioned once in the Koran.  Palestinians want it because of its historic value to Jews.  What we have created, they covet.  No wonder coveting was listed in the 10 Commandments as a no-no.