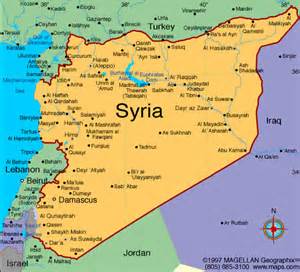 Syria is planning to get even with Israel's strikes on Damascus's shipments of advanced Iranian missiles bound for Hezbollah terrorists last Friday and Sunday.  They've said that they are going to give Hezbollah  strategic weapons it never had before that are "game-changing."  On the map above, Israel is in the bottom left hand corner in gray.  We can just see the northern part.

Hezbollah leader Sheik Hassan Nasrallah has exchanged threats over the past months with Israel.  They have tens of thousands of rockets.  Most of them are the unguided type but the shipments that Israel hit last week included precision- guided missiles.  Nasrallah said "they can strike anywhere in Israel."  That means they are the long range type.   Hezbollah is one of the groups trying to wipe out Israel and drive her into the sea.

Nasrallah hasn't been out in public since the 2006 war that lasted 34 days.  It left 1,200 Lebanese and 160 Israelis dead.  Of course, one must remember that Syria's population was 22,505,000 and Israel's was 6 million. about 4:1. They don't mind wasting their soldiers while Israel has a different morality.   Nasrallah fears he'll be a target so he's laying low.

After this threat from Nasrallah, Israel's Foreign Ministry spokesman, Yigal Palmor responded by saying that "We don't respond to words.  We respond to action."  Israel has warned Syria many times that their air force would strike against any shipments of strategic missiles that might be bound for Hezbollah.

As part of Israel's defense, they have asked Russia to cancel a sale of advanced air defense system to Syria. The deal is  providing the S-300 anti-aircraft missiles.  Kerry said it would a destabilizing factor for Israel's security.

Syria has been a part of every war against Israel since 1948.  By hitting the shipment for Hezbollah, Israel actually helped out the rebels.  Hezbollah and Iran are deeply involved in Syria's civil war by supplying troops and military advisers for Assad.  Israel didn't want to get involved but cannot afford to stand by and see a terrorist group created to take down Israel be armed with such dangerous weapons.

Ever since the 20th century BCE, the Assyrians, also a Semitic people, were aggressive and expanded in the 13th and 10th centuries.  Israel's King David and Solomon had to fight against the Aramean states in Mesopotamia and Syria probably helped. In 732 BCE, Jerusalem became a vassal of the Neo-Assyrian Empire.   By 721 BCE, Assyria's  Sargon held a siege of Samaria (capital of Israel) and captured it  He then deported 27,290 Israelites to Assyria and Media and replaced them with Syrian and Babylonian prisoners.

Actually Syria of today was called Aram, land of the Arameans in the Bible. According to the Bible, they had a common ancestry with the Israelite patriarchs who were also of Aramaic origin and maintained ties of marriage with the tribes of Aram.   Their kings just couldn't create a homogeneous state.  The coast was settled by the Phoenicians and there was constant friction with Israel and the 2nd state of Judah until the 8th century BCE when Syria was overrun by the Assyrians. The principal Aramean deity in Syria was Hadad, god of the wind, rain, thunder and lightning.

There has been a Jewish population in Syria at Antioch who suffered from the hostility of the Greeks.  The Arab Muslim Conquest of 634-37 actually made their life better as they were allowed to maintain their faith but had to a pay poll-tax as they were classified as 2nd class citizens or dhimmis.  Aleppo had the biggest Jewish population of 5,000.  There were 3,000 in Damascus and 2,000 in Palmyra.  They increased after 1492 with the Spanish Inquisition.  In 1943 there were 30,000 Jews in Syria.  Anti-Semitism ran rampant.  ever since 1948.  It's extremism was mainly responsible for the Six Day War of 1967.  Israel defeated the Syrian army and took the Golan Heights where they had been bombarding down on Israel settlements.

Today Syria's forces attacked rebel positions in Aleppo and Idlib in the north.  Their warplanes hit rebels near the military air base outside Aleppo, called Mannagh.  Several rockets landed in Lebanon.  Turkey is testing injured Syrian rebels for chemical warfare wounds.  They have about 12 injured and will have the results soon.   Iran, who is the leader of this defense of Assad,  has built a new radar-evading drone which can fly at high altitudes.