The Muhammad al-Durrah Incident in Gaza in 2,000 and The Final Outcome 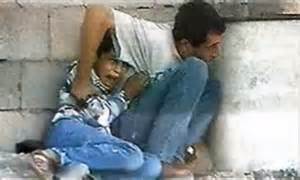 Almost 13 years ago, on the 2nd day of the 2nd Intifada, the Palestinian Hamas terrorists and the Palestinian National Security Forces were firing at Israeli soldiers at the Netzarim Junction in the Gaza Strip. Rioting was widespread in Gaza at this time.   This was before 2005 when all Jews were pulled out of Gaza by their government for the sake of peace.  There poised with a camera hoping to catch some indiscretion of the Israelis was Palestinian Talal Abu Rahma filming the Intifada.  He was a freelancer for France 2, serving the French audience.

Caught between the shooters in the crossfire next to a big concrete cylinder and against a wall made of cement blocks was Jamal al Durrah and his 12 year old son, Muhammad.  It was noontime.  Why they found it important to be out in such a time amid the 2nd day of  war is not known, but there they were, the boy behind his father in a crouch position holding onto his father's tee shirt.  The father was shot several times after waving his arms and the boy was shot and thought to have died later, but this is even in question.   The camera does not tell us if he died immediately from the shooting.  Who shot the pair?  Palestinians or Israelis?  The footage shot lasted just over a minute and only showed the pair holding onto each other with the boy crying and the father waving, and then gunfire and dust.  After that the boy is seen slumped across his father's legs. It actually looks to me like the boy was actually shielding his father from his position.  To be truly protected, the boy should have been up against the wall and next to the cylinder with the father covering him.

Shown in France was 59 seconds with a voice-over from Charles Enderlin, France 2's bureau chief stationed in Israel.  He was not a witness to the incident and had to get all the information by phone from Talal, the Palestinian cameraman.  He took the liberty of telling viewers that the al-Durrahs had been the "target of fire from the Israeli positions," and that the boy had died.  There was a very emotional public funeral for him, and Muhammad was called a martyr throughout the Arab and Muslim worlds.  It was an explosive situation during a very explosive time of the Intifada.  Charles truly had poured gasoline on an already out of control fire.

The IDF accepted responsibility at first and Israel apologized for the death of the boy but an investigation indicated that the boy was most likely killed by Palestinian fire.  (They really needed to see the bullets and determine what type of gun they came from for this as any CSI detective would pronounce.)  Israel is not out to kill children.  That is not their goal, and they didn't start the Intifada.

3 senior French journalists saw the raw footage later in 2004 and couldn't determine that the boy had even died from it and saw that France 2 cut a final few seconds of the footage where he appeared to lift his hand from his face.  This France 2 news editor said a year later in 2005 that no one for sure could say who fired the shots.  The director of the Israeli government press office felt that the scene had been staged by Palestinian protesters.  This has happened before that film has been staged.  Philippe Karsenty, a French media commentator was sued for libel by France 2 for suggesting this, as others in the business also suspected this was the case.  The Paris Court of Appeal overturned a ruling against him in May 2008 who agreed that some scenes didn't seem genuine.  He also had presented the court a great deal of evidence for this.  The court found that the Palestinian cameraman , Talal Abu Rahma, was not credible.  France 2 has appealed the decision.

The Arabs are proving that they still carry on a blood libel with the Jews in this event.  It showed the people involved in this case that the Palestinians were willing to deliberately sacrifice their own children in the anti-Zionist war.

This event has been used to cause other violent uprisings like the October 2000 lynching of 2 Israeli army reservists in Ramallah.  It was seen in the background when Daniel Pearl, the Jewish-American journalist was beheaded by al-Qaeda in 2002.

James Fallows wrote that no version of the truth about the footage will ever emerge that all sides consider believable.  The viewers of the film only see what they want to see according to Charles Enderlin.  During this time, also known as the al-Aqsa Intifada,  which lasted from September 2000 to 2005, 3,000 Palestinians died along with 1,000 Israelis and 64 foreigners.  The first Intifada lasted from 1987 to 1993.

Israel has now released a government report that cleared the Israel Defense Forces of wrongdoing.  A "secret" Facebook group of foreign correspondents known to others as "The Vulture Club" which has about 3,000 members and human rights activists turned into an anti-Israel hate-fest yesterday after this came out.  They have mocked the report, attack the IDF, and claim that pro-Israel lobbyists were influencing the media coverage.  The New York Times was also blasted for its coverage.  The Associated Press and the Agence France-Presse also attacked Israel.  They claim that Israeli embassies call their contacts and they agree to publish what they say.

They say a picture is worth 1,000 words, but today even that is not reliable.  There is Photo-Shop, and there are stages scenes that are used as propaganda.  One has to look at motive.  What motive would the Israelis have to shoot to kill a child?  First, it's not within our ethics and morality to do such a thing.  Second, it's wonderful motive for the Palestinians to do this.  They are not  beneath using walking bombers that sacrifice their lives to kill Israelis.  War is Hell, as they say, and this is a good example of why one shouldn't be out between two warring factions. Rioting was going on with people who shoot guns.   So much for trusting the media today.  I wouldn't give you 2 cents for the reliability of these foreign correspondents that are truly Vultures. Guys, these are old tactics.  Where have you been?  Check out the bullets and make sure they came from the body, not out of some pocket.  The film does not prove anything other than where they were and that the boy was scared.   Proof is not he said she said.  Israel had already taken responsibility and had apologized but doesn't want to take the fault if it wasn't theirs in the first place.

Posted by Nadene Goldfoot at 4:14 PM

Further video not seen on TV shows the boy was alive, and bullet holes were already in wall. http://unitedwithisrael.org/israeli-government-report-idf-did-not-kill-palestinian-child-in-2000/?inf_contact_key=4477e5b7cfdf4dc2cfe2837b1c894190f2f9eed915b60c7dec54b434f40b4ea5