Turkey's New Attack on Israel Through Comoros Over Mavi Marmara 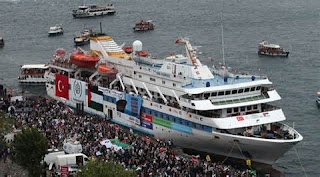 The 3 year old incident of the Turkish ship, the Mavi Marmara who sailed into the sea near Gaza in trying to break the Israeli blockade.  A Turkish backed and organized flotilla had been created to back the Palestinians who had been firing mortars, missiles and rockets into Israel since 2001. The attacks from Gaza increased from 2006 on since Israel had pulled out in 2005 and it became a launching pad of death and destruction into Israel.

The flotilla of 6 ships was organized by the Free Gaza Movement and  The Turkish Foundation For Human Rights and Freedom and  Humanitarian Relief  (İHH).   Israel was trying to keep weapons from reaching the Palestinians so had forewarned this flotilla that it had the international right to search all the ships for contraband such as anything like these weapons.  They were all saying that they were just bringing in goods that they had been deprived of.  It was well known that trucks from Israel went into Gaza everyday with shipments of goods so that was just not the case.

All ships were in compliance with the regulations of allowing Israeli commandos on board to be checked except the Mavi Marmara, registered in Comoros,  who attacked the young sailors who then were fighting for their own lives. Israel's commandos met up with 40 "hardcore" activists  armed with iron bars and knives.  10 Israeli commandos were wounded, one severely.  According to the AP report in this morning's paper, it was "Israeli commandos storming the ship."  They did have to board from a helicopter because the ship was large and high up.  A motorboat wouldn't have helped them.  In the resistance of Israeli checking, the Turks lost 8 and another who was a Turkish-American.  Several other pro-Palestinian activists were wounded as well. 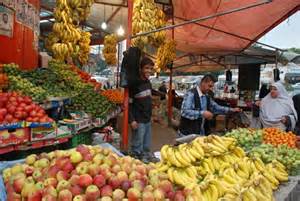 Gaza Open Air Market (Shuk)
When President Obama last visited Netanyahu in Israel, he talked the Israeli Prime Minister into apologizing to the Turkish President.  Actually, many of us feel that it was the Turks who needed to apologize for not only breaking the blockade in the first place but in attacking  the fellows whose job it was to check the ship.  Other ships hadn't reacted like they had. They had used passive resistance.   The Turks had brought on the attack themselves.  Since then, Turkey has demanded this and demanded that, including a huge lump of cash.

The prime minister of Turkey involved in all of this is Recep Tayyip Erdogan.  He wants Israel to pay a lot of reparations.  He is a strong Muslim, more inclined to be in the axis of the Muslim Brotherhood.. This incident is used as the reason of the break in relations between Israel and Turkey.   The newest development out of Turkey towards this blockade incident that happened May 31, 2010, is being that the ship was registered in the tiny country of Comoros, they are having Comoros complain to the International Criminal Court in The Hague, Netherlands and expects them to investigate. As it is, a Turkish law firm is the representation for Comoros.  It might as well be Turkey!

Comeros is a tiny African state and a member of the court.  Israel and Turkey are not members.  Turkey is using Comeros's position to get more negativity thrown at Israel.  Comoros became a member of the UN in November 1975.  It is an archipelago near Madagascar  in which France still maintains control over one of 4 islands that make it up.. This tiny state is a member of many groups:  the African Union, the Arab League, the European Development Fund, the World Bank, the International Monetary Fund, the Indian Ocean Commission, and the African Development Bank.  They accepted the Kyoto Protocol to the UN Framework convention on climate Change.  I wonder if it doesn't cost anything to belong to each group?   The state has a population of about 798,000 and is 98% Sunni Muslim.  Islam is the state religion. It is the 43rd largest out of 48 Muslim majority countries with Qatar being the 44th largest.   The Muslim Brotherhood is out to destroy Israel and is using this approach as well as missiles.

Israel's account is that "according to Israeli Home Front Defense Minister Matan Vilnai,  all of the dead were "involved in the fighting". Vilnai told a Knesset hearing that "there were no innocents among the dead."

Posted by Nadene Goldfoot at 8:07 AM