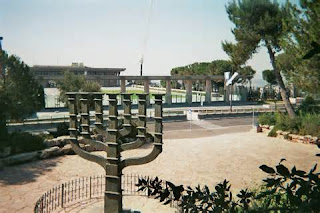 Knesset in Jerusalem
Nadene Goldfoot
There is an Israeli Presidential Conference being held for the 5th year in Israel. It is hosted by Israeli President Shimon Peres.  The theme of the meeting is "Facing Tomorrow 2013".   It brings together statesmen and leading experts in various disciplines to discuss ways to address the world's problems.  The goal is to identify challenges and propose solutions.

Palestinians are boycotting this meeting and urging everyone else to do so.  There is a BDS (boycott, divestment, sanctions) movement going on to boycott everything and anything from Israel by people so are anti-Israel/anti-Jewish. It was started by the Palestinians on July 9, 2005.   Included in this is the academic boycott, such as this meeting.  It is led by Palestinians and even a few Israeli leftists and others who oppose Israel's policies toward the Palestinians.  They know just how important celebrities are today in swaying viewpoints, so are against anyone of this status attending.   It should be noted that Bill Clinton, Mikhail Gorbachev and Tony Blair plan to attend this 3 day meeting that begins on June 18th.

Stephen Hawking, British physicist, was invited to attend but has been most wishy-washy in his reply.  He suffers from ALS-amyotrophic lateral sclerosis, Lou Gehrig's disease and is immobilized in a wheelchair.  Last year, he took part in the Seattle Science Festival Luminaries Series.  This year he was going to attend and then let officials know he wasn't because he thought he should respect a Palestinian call to boycott contacts with Israeli academics.  This came from the University of Cambridge in their released statement.  They said that Hawking had told the Israelis that he would not be attending "based on advice from Palestinian academics that he should respect the boycott. Earlier yesterday, sources claimed that Professor Stephen attributed his decision to a new-found “knowledge of Palestine.”

University officials had previously understood that Hawking's decision not to attend  was based on health concerns being he is disabled and 71 years of age.  This meant that he joined the boycott protesting Israel's treatment of Palestinians.

The boycott has brought pressure on entertainers from performing at the conference such as Elvis Costello and the Pixies, Klaxon and the Gorillaz Sound System.  Israel has been facing the BDS movement which is the biggest on USA college campuses in any context, such as products produced in Israel.

The British Committee for the Universities of Palestine as gloating over this success.  They are crowing  that this decision shows support for severing academics' connections with Israel.  and shows  Hawking's respect of the boycott based upon his knowledge of Palestine and on the unanimous advice of his own academic contacts there.

Now, here's where the Washington Post is siding with the boycott.  They wrote in their article cited below, "In 1967, Israel captured the West Bank, Gaza and east Jerusalem, territories the Palestinians seek for a state."    This shows the reporters don't even know the real facts.  Israel was attacked by all the surrounding Arab states in 1967.  They  fought back and won the battle and in doing so gained these areas.  The way it is written sounds like they went on the attack and they didn't start this war at all.  Israel has been attacked by the Palestinians ever since they became a state and even before.  In the decision to create Israel, Palestinians were also offered the chance to have their own state but their leadership refused;  turned it down.  Why?  They really wanted all of Israel out so planned on taking over the whole piece of Israel.  That's why they kept saying that they would drive Israel into the sea.  It's been a battle ever since because of their constant refusal to have their own state and their resistance to accept Israel as the Jewish state in their midst.  Jews aren't allowed into Saudi Arabia and Jews are evidently not allowed back into the Middle East according to their thinking.

I am most disappointed in the European attitude to convict Israel when they don't even know the circumstances involved-and they call themselves the intelligent ones.  I have yet to see any thoughts from such a world against Palestinians who have rained rockets, mortars and missiles on Israel for the past 13 years from Gaza and after Israel pulled out all Jews living there for the sake of peace.   One can't defend itself from attack?  Not if they're a tiny Jewish country, evidently.

http://blogs.jpost.com/content/booze-bds-and-stephen-hawking After reading this article, it's no surprise that Hawking is not attending the conference with his attitude. Little does he realize that Palestinians are not supporters of disabled people.