Jews Stoned By Muslims at Temple Site in Jerusalem 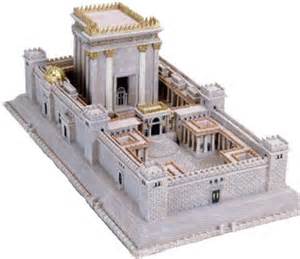 King Solomon (961 BCE- 920 BCE) built our first Temple.  It was built as a shrine for the Ark of the Covenant, the sacred vessels and offerings, with a court for worshipers which was destroyed.   It had consisted of a hall, shrine and the inner sanctum, which was the "holy of holies."  The holy of holies is not mentioned in the Koran but is mentioned many times in the Torah.  For that matter, this very mosque is not mentioned  in the Koran either; only the "farthest mosque".

The holy of holies, called "devir" in Hebrew was where the ark was kept.  It had a raised floor and was windowless.  The ark  was a chest in which the 2 Tablets of the Law were kept, made of acacia wood inlaid and covered with gold.  It was held as being so sacred that even the high priest could see it only once a year on Yom Kipper, the holy day of atonement.  "When the High Priest entered the Holy of Holies on Yom Kippur, he prayed for the peace of the People of Israel and the entire world." .  From the time of Moses to the Temple, the ark was taken out from the Holy of Holies also  in case of national need to lead the people on their journey and help them in battle.   Legend is that Josiah hid it when the Israelites were attacked by Babylon.   The Temple was destroyed completely by Nebuchadnezzar, the Babylon king  in 586 BCE.

Our 2nd Temple was rebuilt on Mt. Moriah in Jerusalem in 538-515 BCE and destroyed in 70 CE by the Romans .  Surrounding the Temple was the Western Wall, also called the Wailing Wall.  Today, part of the wall still stands in Jerusalem and it is a site where Jews go to pray.  The custom is to put slips of papers with one's prayer in between the stones of the wall. 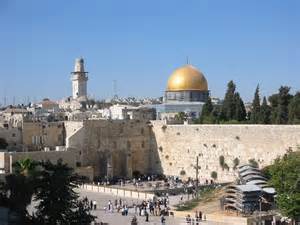 The Mosque of Omar (3rd holy Muslim site) stands over the site of the Temple Mount, built after 70 CE in the Moslem Period.  It is also called the Dome of the Rock.  It was built in the center of the Temple area (al-Harim ash-Sherif_ in Jerusalem by Caliph Abd al-Malik in about 738 CE to replace the temporary structure set up by Caliph Omar a century earlier.  It is situated on the traditional site of Mt. Moriah.

Moshe Dayan was very careful to allow Muslims the rights to the Mosque. Today the Waqf-the Islamic Religious Authority, with the agreement and cooperation of the Israeli government administer this site.   Extremist Muslims have been stopping Jews from accessing this holiest of Jewish sites in Israel.  Jews are met with attacks who try to get close to the former Temple. Jews are not the only ones wanting to visit.  Most all Christians also expect to visit this site as well.

The site was open from 11am and would reopen from 1:00pm to 2:30pm in the afternoon.  However, 30 teen-aged Arab rioters gathered around 10:30 am Sunday morning and started throwing rocks at the groups of  Jews who were touring the Temple Mount.  This day happened to be the end of the holiday of Passover.

The Jewish group was escorted by the police as called for.  6 rioters were arrested.  There are many Jewish laws connected with how one goes up to and walks the grounds of the Temple Mount.  Because the exact location of the "holy of holies" is not known today, great care must be taken by educated, observant Jews who visit the area.

This was a serious attack during such an important religious holiday.  But this isn't the first, just one of many attacks.  On March 8th, 100 masked extremists attacked security forces by throwing rocks.  This was a Friday and it happened right after the end of Muslim prayers in the mosque.  They then threw petrol bombs at the police who had to fire back with stun guns.  Muslim women blocked the Jews.  Those injured by rocks had to be taken to the hospital.

This is Jerusalem, the capital of Israel.  Why is it that the Muslims cannot tolerate Jews who have legal rights to walk near the mosque at certain designated times as agreed with their waqf?  After all, it was the most sacred Jewish site, The Temple, in the first place.  Understanding, sensitivity that Moshe Dayan displayed is not to be given in return to the Jews?  This is deplorable for any religion.  With such a chip on their shoulder now, what would life be like with a Palestine next door as a neighbor?

Posted by Nadene Goldfoot at 10:22 AM