Israeli Jews Fighting Western Anti-Semitism Along With The Muslim World 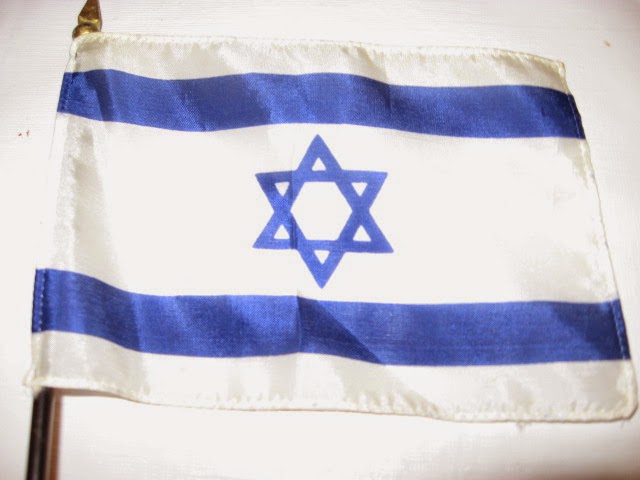 Before WWI was over, the West knew they would be ready to rule Palestine.  "In 1916, Britain and France concluded the Sykes–Picot Agreement, which proposed to divide the Middle East between them into spheres of influence, with "Palestine" as an international enclave."

On November 2, 1917 the Balfour Declaration in essence created the right of the Jews to regain Palestine as the Jewish Homeland because the allies had won WWI and the Ottoman Empire was beaten.  They had sided with the Germans.  It took 31 years for the Jews to be able to announce that Israel was accepted in the United Nations.

"At the Peace Conference in 1919, Emir Faisal, speaking on behalf of King Hussein, asked for Arab independence, or at minimum the right to pick the mandatory.  In the end, he recommended an Arab state under a British mandate. The World Zionist Organization also asked for a British mandate, and asserted the 'historic title of the Jewish people to Palestine'"

During the 25 years of waiting to have their own state once again and  being homeless for the past 1,847 years, WWII emerged.  The main victims of this war were the Jews.  Jews are followers of Moses, the people of the "Old Testament."  Since the New  Testament for Gentiles replaced the "Old", the Jews became those repulsed despicable people.  Religion certainly is strange.

Six million Jews were slaughtered in Germany's plan to exterminate them all in the whole world before the allies again won the war.  What they did to deserve being slaughtered was that they were different.  They were not of everyone else's religion. They wouldn't convert.   In Germany they had been residents there since 70 CE or even before when Jerusalem was attacked by the Romans.  They had a long history of being good patriotic citizens even though  they had been  attacked by the Gentile Germans on occasion.  Many had reacted from these attacks by moving into other countries.  They worked their way into the Pale of Settlement held by Russia.  The Nazis of WWII were able to reach all the Jews of Europe and tried to get the ones in Africa before they were stopped.  In 6 years, 6 million civilian  Jews were slaughtered.

WWII ended on May 5, 1945.  Three (3) years separated the end of the war and the birth of Israel.  A whole generation had gone by since it was decided that a Jewish Homeland should be created.  The generation that lived during  the Holocaust must have realized that the waiting period  caused the death of 6 million innocent people.  They could have been saved if they had been allowed to enter Palestine, but the British stopped them from entering.  They even turned back shiploads of Jews who were so close to freedom.  Not the Arabs, though.  They aided and abetted their entrance.  Could be their strong anti-Semitism  of a few thousand years was guiding their decisions?

England's history with Jews is shameful. Jews lived in England since Roman times, and were noticed as Jews in 1070.   Jews lived in Jerusalem after its attack in 70 CE, but along came the Crusaders led by England in 1099 and massacred their Jewish community.  By 1290 King Edward of  England expelled any Jews from   living there. Jews couldn't return until Oliver Cromwell in 1656 changed that, though there were a few Sephardic Jews there in 1655. Cromwell died 2 years later after the Jewish admission.     In their defense, there isn't a country that didn't treat Jews in the same manner.  England was just earlier than most in being so anti-Semitic.  Cyprus, the Byzantine Empire and  Germany preceded England in their anti-Semitic acts.  France and Spain were close behind, following England.  England was without Jews for 366 years, from the Middle Ages to the Age of Enlightenment.    300,000 Jews were living in England  about 10 years ago, but the 2011 census counted 263,346.

During those 25 years of holding the Palestine mandate, England turned their heads when Arabs were entering Palestine illegally.  The whole world had been suffering from anti-Semitism since the time the Jews lost Jerusalem, anyway because of their own religious reasons.  It wasn't until 1967 when Israel was attacked unmercifully by all their neighbors in a take-over and the massive combined armies lost the battle.  Suddenly the Jews were heroes being they were then the underdogs.  Like a soccer game upset, the little state of Israel overcame all the odds and were the winners.  Their popularity didn't last long and anti-Semitism settled back into the hearts of the world again.  Oh-they are the Jews!

We all know what the Muslim world is doing to drive out Jews from Israel.  Does the western world see how they are in cahoots with such a goal?  Take Amnesty International, supposedly a group promoting universal human-rights principals- evidently for all except for Jews.  Being the most influential NGO in the world,  they're silent when it comes to Jews' rights.  Jewish civilians, young children included, have been severely injured from stone-throwing Palestinians, stabbing attacks, and have been killed in shootings.  Israelis are consistently dehumanized and demonized by Muslims.

They're first to enter the political scene against Israel.  April 2002, an Amnesty official on BBC confirmed IDF massacre in Jenin, which never took place.  It was a blood libel that continues to be propagated.  In 2009, they were participating in the Goldstone Report which was filled with many false indictments against Israel after Operation Cast Lead in Gaza.  They are obsessed against Israel.  Israel of late has been peppered by petrol bombs but Amnesty International says they pose little or no threat to the lives of the IDF.

How about the BDS Movement?   .  It was started by Palestinians on July 9, 2005 and is still continuing.  It's a Boycott, Divestment and Sanctions against Israel that is trying to attack Israel's economic growth and development which a state needs to exist.  Almost all American universities as well as European ones are on the bandwagon against Israel on this.

I have news for you all.  Israel's Jews aren't going anywhere.  They've been there, done that in being homeless, something that lasted 2,000 years.  They know what you all are like.  They have faith in their religious belief in that it promotes goodness, something they really have seen very little of in the rest of the world.  They know they're onto a good thing.  Their ancestors told them so, and they see that they were right.  Somebody has to be the light of the world even though the world is throwing a lot of water on their light in trying to put it out.  Like the Burning Bush that radiated without fire, the Jews continue to radiate their goodness in an evil world.  If anti-Semites would only take their blinders off, they might see it.