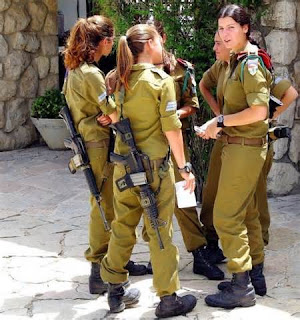 Israel has Jewish females in the IDF.  They also have volunteer Arab male soldiers in the IDF .  This is their country too, and should want to fight for it.  This is a big topic in Israel as Yeshiva students have been excused from serving in the IDF for at least the past 10 years, but are  being expected to serve once again.

Arutz Sheva reports that MK Hanin Zoabi, a woman, has had strong opposition to having Arabs join the IDF, regardless of sex.  She feels that if a law requires Arab Israelis to enlist in the army is passed, Israel should prepare prisons for them.  She was also a member of the crew on the Mari Marmarva which was the main ship of the flotilla protesting against Israel.

Two Arab women who enlisted in the army this week are criticizing her stand on this.  They feel she does not represent them or other Arabs who want to serve in the army.  They themselves did face a little opposition in their village.  They feel it is good for them to join up.  I see one of the young women lives near Tzvat (Safed) where I lived for almost 5 years.  They are Israeli Christians who speak Arabic and feel their serving would be with pride and they should not feel ashamed for doing so.

Jarisi said that "any extremist in Israel who thinks of themselves first as Palestinian doesn't have to stay here.  He's a zero.  She thinks Zoabi should go to Gaza where such people  will be welcomed with open arms."  She feels that Zoabi doesn't have the right to speak in her name. Rajda Jarisi doesn't see herself as an Arab anymore.  She sees herself as an Israeli.

Zoabi has built up a bad reputation by being seen with senior Hamas terrorists in the past.  She has given anti-Israel speeches and talking about Israel's "occupation."

However, the Supreme Court has decided to allow Zoabi to run for election.  How democratic to a fault Israel is.  Especially noted is the fact that "Zoabi rejects the idea of Israel as a Jewish state, which she describes as "inherently racist." She has argued that this is the only way to combat Avigdor Lieberman's demand that Israeli citizens take loyalty oaths: "Balad's concept, which rejects the 'Jewish state' idea, is the only idea that can remove [Avigdor] Lieberman from the circle of political and moral legitimacy... When you agree with the 'Jewish state' idea, you necessarily agree with the idea of loyalty to this state. Rejecting the 'Jewish state' concept will block the road for anyone who demands our loyalty to such a state."Zoabi sees no difference between Lieberman and more mainstream Israeli politicians, saying that Lieberman, Tzipi Livni, and Benjamin Netanyahu are "all a bunch of fascists pure and simple."

Israel was created to a a Jewish state.  It is the only one in a world full of Muslim states or Christian states.  It was created as a Jewish state because of the religious bigotry of these other two and how they treated Jews for the past 2,000 years.  Even the whole world decided this was a right for the Jewish people finally, and voted for the Jewish Homeland through the League of Nations in 1917.  Too bad you don't go for this, Zoabi.  I  join my Israeli Christian sisters in recommending that you move onto Gaza if you don't like Israel and think so badly of  the state that is giving you a refuge from refugee camps that others would rather live in.  Good for Naradin Tuma and Rajda Jarisi.  They are our citizens.  I think the Supreme Court should have requirements for MK's to be loyal people.  They're really going overboard on this fairness issue.