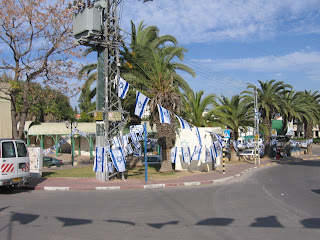 Nadene Goldfoot
Sderot at top and Ashkelon on the bottom
Yahoo news reports that Israel's Iron Dome Air Defence System stopped a rocket that was aimed at Ashkelon, Portland's, sister city on Tuesday. It lies 8.1 miles north of the Gaza border and has a population of about 113,000.   That's like shooting at the hand that feeds them, as Ashkelon houses the Barzilai Medical Center's hospital that assists Arabs,  even if they are from Gaza as well as Israelis. This 500 bed general public hospital services 502 square miles.  It's a level 2 trauma center and is Israel's foremost center for trauma care and nurse training.

The Gaza border shot 1600 Kassam missiles in 2006 and the hospital treated 1400 patients with acute and post traumatic stress disorders and diseases that same year.  Each year they have 100,000 emergency admissions.  Their 500 beds allow 1 bed per 1,000 residents which is the lowest in the country as they serve over 500,000 people.  The nurses get no breaks as they have 150% constant occupancy each year.  Their cafeteria has been converted into hospital bed space as well.

Then on Friday Hamas terrorists shot a rocket into the Eshkol region which usually covers Nir Oz and Nirim Yesha..  Later today 3 rockets were shot at Sderot, a city of 24,000 which is the closest town to Gaza. Sderot happens to be right in the line of fire, being  less than a mile from the border and is caught under constant attack, shock and confusion with the people having daily fears and suffering from a silent threat daily.  They have been paying the heavy price of having their community shelled constantly.  Thousands of their families have been living under constant fire.   No casualties or damage happened, except people had to seek refuge in bomb shelters, and the bombing shatters their lives for both children and adults.  Just from 2007-2008 they were hit with 771 rockets and 857 mortars, making this happen at least 3 to 4 times daily.

It was in June of this year that the terrorists fired dozens of rockets into Israel who replied with several air raids, killing 15 terrorists.  However, this type of bombing into southern Israel has been going on since  2000, climaxing what Israel had hoped to be once and for all on December 27, 2008 with Operation Cast Lead.  Up to this point Israel had taken about 12,000 rocket, missile and mortar hits. The UN never said a peep against the terrorists, and I presume just thought that Israel should be the sitting ducks and deserved the shelling due to their silence.

2008 was the last straw for Israel.  In that year alone they were hit with about 3,000 rockets and mortar bombs.  Perhaps that came about because in June 2007, Hamas took over the Gaza Strip and overthrew the acceptable Palestinian Authority.  Abbas had to leave and go to the Judea-Samaria area to live and Hamas set up a radical Muslim entity.  Then they really were following the Muslim Brotherhood Code.

Iran and their sidekick, Syria supported Hamas who now used Gaza as its launching pad for terrorism against Israel.  They have more than 20,000 armed operatives in Gaza and kept improving the range of the shelling.  By late 2008 they could reach some of Israel's largest and most populated cities.  Israel suffered from deliberate attacks which caused them deaths, injuries and lots of property damage.  Business had to close and tens of thousands of Israeli citizens had to leave their homes for bomb shelters.

Israel tried several methods of stopping the affront through proper channels like appealing to the UN Secretary General and many presidents of the security council as well as overtures to diplomats directly and through intermediaries with no luck.  They were only able to see the Palestinian terrorists escalate in their cross-border attacks and raid Israeli territory in June 2006 and even kidnap an IDF soldier, Corporal Gilad Shalit.

After much warning of what would happen to the whole world, not just to Gaza, Israel resorted to force, feeling it was high time and a proportionate response to the attacks.  The IDF did more than the USA soldiers would have done in avoiding or limiting harm to civilians in Gaza.  They were rewarded by a punishing report from South Africa's Goldstone Report, which Goldstone himself had to apologize for later, admitting it was wrongly reported to him by his comrades.  The damage had been done, however.  The attack against Israel has caused them much harm politically.

Has Goldstone or anyone else in the UN tried to stop the continual attacks of Hamas on Israel?