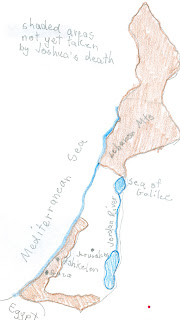 Nadene Goldfoot
Moses lived from about 1391 BCE to 1271 BCE.  The Borders of Eretz Yisrael were dictated to Moses by G-d  as found in Numbers 33:52 to 34:21. " The land of Canaan is to fall to you as an inheritance. The fact remains that Moses never did get to enter Canaan but certainly was able to be knowledgeable about the geography through this communication. .

This shall be the Land for you,  according to its borders all around".  In the map above, the brown shaded areas were not yet taken by the time Joshua, the Israelite commander and successor of Moses,  died.  Moses had directed him to to lead the people in the conquest of Canaan.  Judah and Samaria are included inside the borders of Israel being they are on the West side of the Jordan River; thus the incorrect name of "West Bank," given to the area by the Jordanians.

Knowing the borders of Israel became important because of the many commandments that are to be followed only inside this land.  Notice that the border begins at the extreme southeast and goes from there to the west, then northward, eastward and finally, southward. to join the original starting point.  The Jews could not bring themselves to eliminate all the Canaanites.   The Northern shaded area with the Lebanon Mts. remained as Lebanon.  King Solomon was able to get Cedar trees from there to use in the Temple through trade and friendly relations.  .

Reference: Tanach, The Stone Edition; the Torah/Prophets/Writings; the 24 books of the bible by Rabbi Nosson Scherman by Mesorah Publications, ltd. 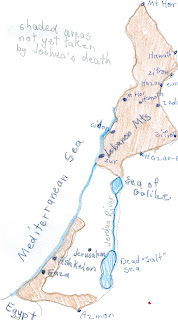 http://en.wikipedia.org/wiki/Moses
Posted by Nadene Goldfoot at 10:55 AM